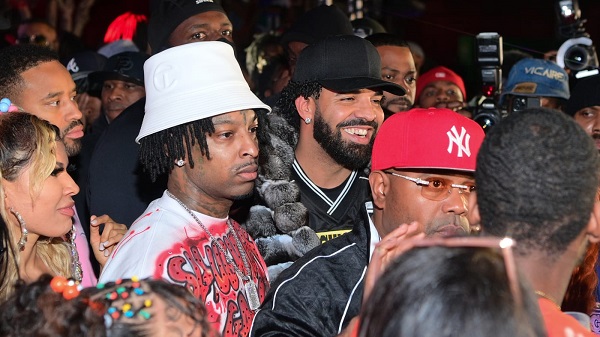 Drake and 21 Savage have shared more details about their collaborative album, Her Loss.

Just hours before the project’s release, the Grammy-winning artists took to Instagram to unveil its official tracklist. The post confirmed Her Loss would span 16 titles, including “Privileged Rappers,” “Treacherous Twins,” “Pussy & Millions,” “Jumbotron Shit Poppin,” and “3AM on Glenwood.” You can check out the full tracklist below.

Drake and 21 announced Her Loss on Oct. 22 in the video for “Jimmy Cooks,” which confirmed an Oct. 28 drop date. The release was ultimately delayed one week after producer Noah “40” Shebib contracted COVID-19 while putting the finishing touches on the LP.

“Our brother [40] got COVID in the middle of mixing and mastering the crack,” Drake wrote on Instagram. “Je’s resting up and we are dropping November 4th.”

Since then, the two have hyped the effort with a series of parody promos, including a fake Vogue cover, an NPR Tiny Desk concert, and an interview with Howard Stern. They also shared the project’s official cover art, shot by Houston-based photographer Paris Aden. The cover is a portrait of Qui Yasuka, a nail stylist and adult entertainer from Houston.

“Drake just saw the photo I guess, and they asked if they could use it for the album,” Aden told Complex about the three-year-old picture. “I shot that shit a long time ago. It was her profile pic and he probably fell in love with what he seen.”

Her Loss will mark Drizzy’s first project release since Honestly, Nevermind, which arrived back in June. 21’s most recent effort was 2020’s Savage Mode II with Metro Boomin. The joint album is set to hit all major streaming services at midnight Friday.