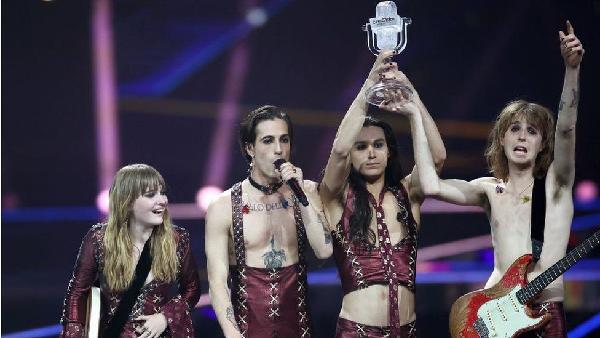 Russia will no longer be allowed to participate in this year's Eurovision Song Contest, the European Broadcasting Union has said.

The EBU, which produces the event, said Russia's inclusion could bring the competition into disrepute "in light of the unprecedented crisis in Ukraine".

Russia launched an attack on its neighbour Ukraine in the early hours of Thursday.

Western governments have ramped up international sanctions in response.

Just 24 hours ago, the contest had said Russia would be allowed to compete, so this is a rapid change in stance for the EBU.

It follows the announcement that football's 2022 Champions League final would be played in Paris, after Russia was stripped of the match following the invasion of Ukraine.

F1's Russian Grand Prix, due to take place in Sochi in September, was also cancelled.

Earlier this week, Ukrainian broadcaster UA:PBC urged the EBU to suspend Russia's Eurovision membership and ban it from the contest.

State broadcasters from countries including Iceland, Finland, Norway and the Netherlands had called for Russia to be banned from the contest.

Finland said if Russia took part, it would not send a representative to the contest in Turin in May.

The EBU said it remained dedicated to "protecting the values of a cultural competition which promotes international exchange and understanding, brings audiences together, celebrates diversity through music and unites Europe on one stage".

UK Culture Secretary Nadine Dorries tweeted: "Eurovision stands for freedom, unity and respect between countries - watched and enjoyed by tens of millions around the world. Glad to see Eurovision taking action and kicking Russia out."

The 66th edition of Eurovision is due to take place in Turin, after Italian rock band Maneskin won the 2021 contest.

Russia had not announced its act for the contest, which it last won in 2008 with Dima Bilan singing Believe.

In recent years, it has been one of the strongest Eurovision performers, with five top five finishes in the past decade.

Ukraine has selected hip-hop trio Kalush Orchestra, whose song Stefania was written as a tribute to their mothers.

The band replaced the country's original contestant, Alina Pash, who withdrew last week after facing scrutiny over a trip she made to Russia-controlled Crimea in 2015.

While there is no suggestion Pash entered Crimea from Russia, she said the controversy over her visit had overshadowed her participation in the contest.

The Ukrainian government considers people who enter the territory via Russia to have crossed the border illegally.

Tensions between Russia and Ukraine have overshadowed previous editions of the song contest.

Russia were favourites to win the competition in 2016, until Ukrainian singer Jamala stole a last-minute victory with a song that depicted the deportation of Crimean Tatars by Josef Stalin in 1944 - a horrific chapter the nation's parliament has described as tantamount to genocide.

The lyrics were widely interpreted as a criticism of Russia's annexation of Crimea in 2014. Jamala, who is herself a Crimean Tartar, appeared to confirm the link when she told the press: "The main message is to remember and to know this story. When we know, we prevent."

On the path to victory, her song picked up several important votes from former Soviet countries who have traditionally voted for Russia. Eurovision expert John Kennedy O'Connor called the result "a pointed slap in Russia's face".

A year later, Russian contestant Julia Samoylova was blocked from entering Ukraine, which was hosting the competition, because she had reportedly toured Crimea without entering it through the border with the Ukrainian mainland.

Russian television station Channel One then announced it would not broadcast the contest or take part.

Jamala has now called on Eurovision fans not to ignore Russia's actions in Ukraine.

"I don't know how this is possible, but they bombed peaceful people," she said in an Instagram video. "Please support Ukraine. Stop Russian aggression.