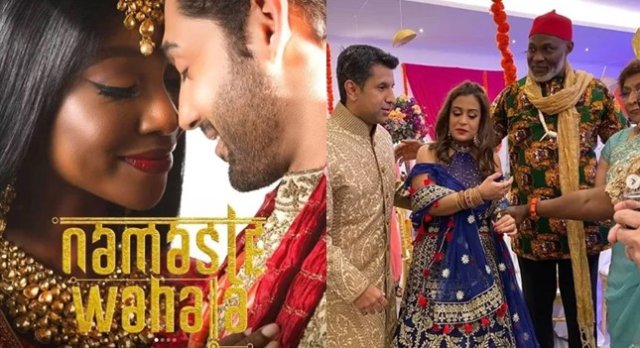 The Nigerian star of upcoming movie Namaste Wahala has told fans that filming has wrapped ahead of its release on 24 April.

Ini Dima-Okojie plays opposite Indian actor Ruslaan Mumtaz in a "love story that cuts across the cultures of two countries".

News of the upcoming film has delighted and amused fans:

"Nollywood featuring Bollywood? This is about to be the most dramatic, over-exaggerated movie ever made,"Â Twitter user Official Gracie said.

"The name alone wants me to watch it. Namaste [means] peace. Wahala [means] trouble/problem. Gotta watch it with some Chicken Biryani and Jollof Rice for the culture(s),"Â said Jerome Antwin-Lewis.

OkayAfrica points out that this isn't the first Nollywood-Bollywood crossover - that distinction belongs to the 2017 film J.U.D.E., it says.