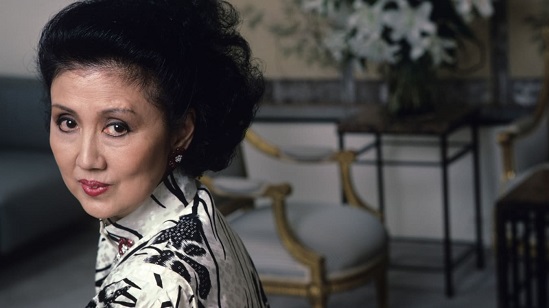 Hanae Mori, the first Asian fashion designer to break into the exclusive world of haute couture, has died at aged 96.

The Japanese designer, whose elegant creations were worn by high-profile figures from Hillary Clinton to Empress Masako, died last Thursday, her office told CNN via email. No cause of death was given in the company's statement, which added that a funeral service has already been held with close relatives.

Born in Shimane prefecture, Japan, in 1926, Mori opened her first Tokyo studio, Hiyoshiya, in 1951, and another three years later. Much of her early career was dedicated to making costumes for the movie industry during a period now considered the golden age of Japanese cinema.

But her ambitions were global -- even at a time when the names of Asian designers barely registered in Western fashion capitals. Her visits to New York and Paris in the 1960s proved formative, as did an encounter with Coco Channel during which the French designer suggested she try on an especially bright orange suit.

"It helped move the scales from my eyes," Mori recalled years later, according to a 1990 profile in the Washington Post, adding: "The whole Japanese concept of beauty is based on concealment...I suddenly realized that I should change my approach and make my dresses help a woman stand out."

She did just that, often blending Western silhouettes with Asian-style motifs, like the butterflies that would later see her dubbed "Madame Butterfly." Mori staged her first overseas show, themed "East Meets West," in New York in 1965. And from there she began blazing a trail that successful Japanese designers, such as Rei Kawakubo, would follow for decades to come.

Together with husband and business partner, Ken, she grew her label in tandem with Japan's booming economy. She opened a showroom on New York's Seventh Avenue in 1973 and, four years later, an atelier on Paris' prestigious Avenue Montaigne, where she counted many of Europe's fashion giants as neighbors. She also became the first Asian designer to be accepted into the prestigious Chambre Syndicale de la Couture Parisienne, making her one of a select group permitted to use the term "haute couture" to describe her hand-crafted garments.

Over the years, her designs were seen on major runways and worn by stars including Grace Kelly. She also produced costumes for major stage productions, including "Cinderella" at the Paris Opera House and, fittingly, "Madame Butterfly" at Milan's La Scala.
Despite her international standing, Mori continued taking prestigious commissions in her home country, too. She designed a succession flight attendant uniforms for Japan Airlines, the most notable of which -- a daringly short polyester knit dress -- was worn through much of the 1970s.

Mori also dressed Japanese athletes for the Barcelona Olympics in 1992. The next year, Japan's Empress -- then Crown Princess -- Masako wore a custom white gown by Mori to her wedding.

Despite launching a successful fragrance company, Mori's firm faced major financial difficulties in the 1990s. In 2002, the year she was named an Officer of France's Legion of Honor, she sold off parts of her business and filed for bankruptcy protection, according to the New York Times. She closed her Paris maison two years later, effectively entering retirement. But she remained active in her later years, designing costumes for operas and collaborating on various exhibitions honoring her decades-long career.