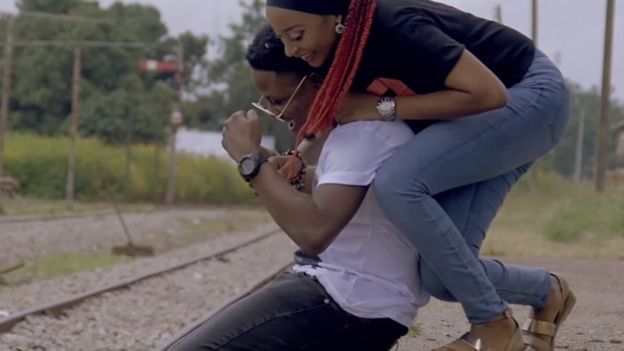 The embrace that led to the ban
Shares

A leading Nigerian actress has been banned from the Hausa-language film industry because of her "immoral" behaviour, the main industry body says.

Rahma Sadau caused offence by "hugging and cuddling" pop star Classiq in a video, it added.

The industry, commonly known as Kannywood, has been under fire from conservative Muslim clerics who accuse it of corrupting people's values.

They regard it as taboo for men and women to hold hands or kiss in public.

Ms Sadau, who is said to be on a holiday in India, has not yet commented on the ban imposed by Motion Pictures Practitioners Association of Nigeria (Moppan).

Its chairman, Muhammadu Kabiru Maikaba, told the BBC Hausa service that the ban was "total".

"This is not the first time that she has been doing these wayward things. We have been warning her, but she still went ahead to dent our image," he said.

The Kannywood star appeared in the video with Classiq,in a song entitled I Love You.

In it, the Nigerian pop star is smitten with a vegetable seller in a market, acted by Ms Sadau.Initially, she rejects his advances, batting him away with a bunch of vegetables, but he eventually wins her over.

They hold hands and engage in a bit of cuddling that would be considered demure in a Western film.

In a statement, Moppan said it hoped Ms Sadau's expulsion would serve as a deterrent for other actors.Its code of conduct requires actors to avoid doing anything which violates Islamic and Hausa culture, reports the BBC's Isa Sanusi from the capital, Abuja.

Many people in northern Nigeria felt she had gone too far with Classiq in the music video, he adds.Classiq cannot be banned because he is not a member of Moppan.Â  BBC News