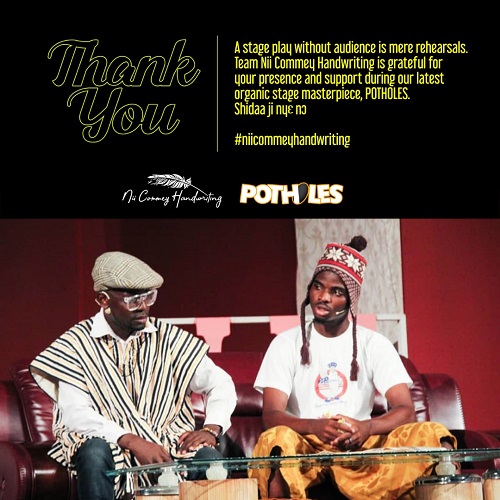 Play wright Nii Commey in its lastest play addressed politics of promise and fail in most African Societies.

'Potholes" is set somewhere in Ghana identified the potholes we meet on the journey of life. While others throw in the towel; some forge ahead, maneuvering their ways out the potholes; and yet others who are also overawed by the depths of the potholes.

The play began with two known figures in a community in Ghana, Kpakpo, /and Malachi, who always actively participate in the politics of their municipality.

The conversation between the two gentlemen showed how one of the candidates Kpakpo he campaigned for neglected him and the municipality. With hopes of getting a better life Kpakpo campaigned for the Senate candidate for the area but after winning the elections the senator was nowhere to be found,  Kpakpo is back to his old life of struggling to make ends meet but Malachi who was obviously not in the camp of elected Senator some years back make mockery of the condition of Kpakpo.

Kpakpo in this state did not remain mute but also responded in equal measure to the Malachi's mockery, Kpakpo then introduced the difficulty Malachi faces aside his education in terms of wooing a lady, it was all fun in the auditorium when Malachi tries to defend himself.

The two gentlemen went back and forth on the candidature of the Bishop and later agreed to give it a try.

They visited Bishop Trinity who was meditating on God's word in his house, he offered them a seat, conversation begun amidst comedy and fun, now the herculean task was who will break the news. The two try and later made their intentions know to Bishop Trinity providing a lot of reasons for him to contest for the position but Bishop Trinity declined.

His daughter, Maameley returned from abroad after studies, and that morning it's all over the local media that Bishop Trinity has decided to contest for the senate position of the municipality to the surprise of Bishop Trinity as he glances through the newspapers of that day.

His daughter (Maameley) is back home, he showed the interesting thing to her, explaining that he has not even accepted the proposal made by the two gentlemen who visited him with the idea some days back, his daughter who graduated with degree in political science believed it's a good idea and she can play a critical role in his father's bid to become the senator of the community forcing Bishop Trinity to agree to contest.

Kpakpo and Malachi came in, Bishop Trinity introduced them to his daughter as the ones behind the media publications, they started with campaign strategies.

Allocations were made, Bishop Trinity's daughter is to take care of the women wing of the municipality, Malachi on all paper works and Kpakpo will be the MC for the media launch of the campaign.

Campaigning began, and one day, a lady (Ngosra) visited Bishop Trinity and spoke about how she was healed from cancer and wanted to help the campaign of the Bishop because of what he has done for her. She offered a huge sum of money and she vows to get the women caucus in the municipality behind him. 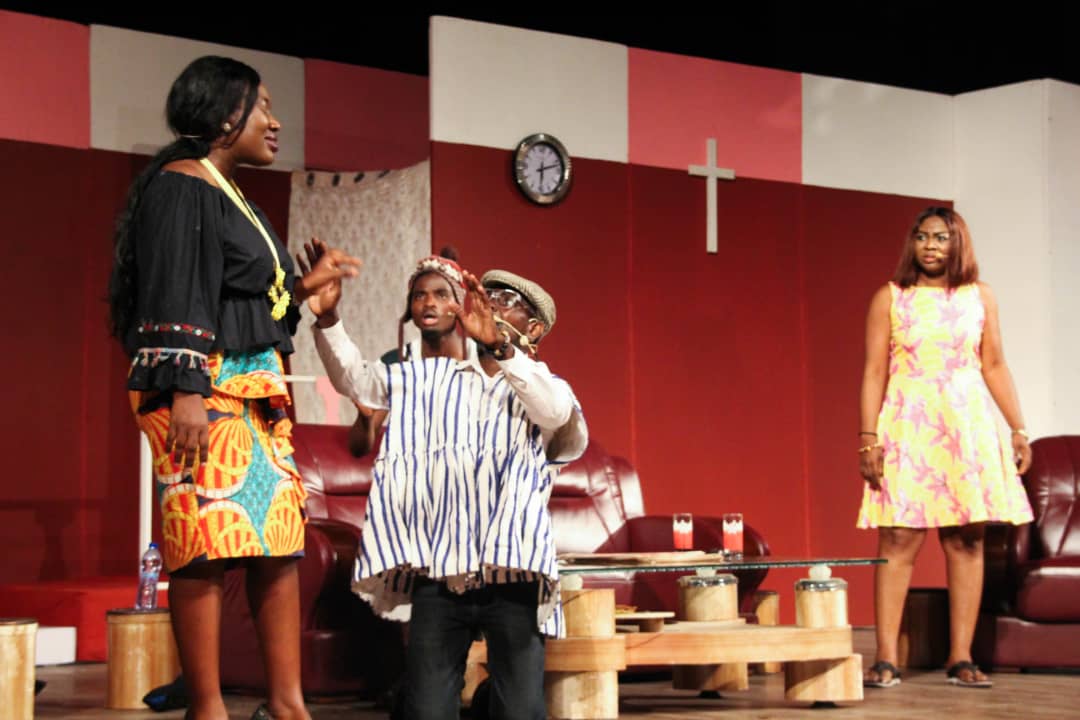 Ngosra's continuous visit did not sit well with Maameley and Malachi but they could not help it but allow her to stay.

At the residence of Bishop Trinity, present were Bishop Trinity, Maamely and Malachi, and a thief broke in and at gunpoint took their laptop which had all campaign documents on it. Days after the robbery, Malachi and Kpakpo decided to visit Bishop Trinity and when they entered Ngosra who claimed to be healed by the Bishop run out of Bishops room complaining of Bishop's attitude of which he had sex with her, the issue went viral  and now Ngosra claimed she is pregnant and threatened to go to the media houses and narrate her story because Bishop Trinity did not want to take responsibility.