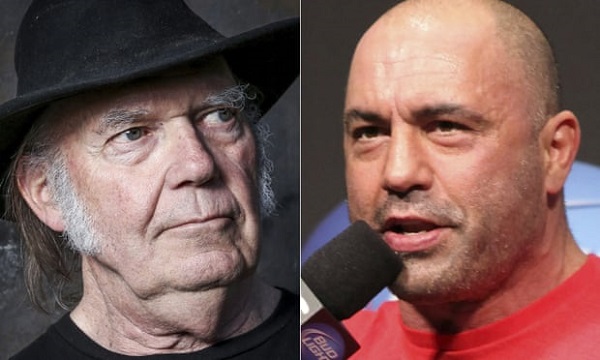 The music streaming platform Spotify is in the process of removing Neil Young’s music after the company refused to take down Joe Rogan’s podcast amid the musician’s objections that it spread vaccine misinformation.

Rogan has been described by the New York Times as “one of the most consumed media products on the planet”. His podcast, the Joe Rogan Experience, is Spotify’s most popular. In 2020, Rogan signed a $100m deal that gave the streaming giant exclusive rights to his show.

But this week, Young posted an open letter to his manager and record label that was later taken down in which he said: “With an estimated 11 million listeners per episode, [The Joe Rogan Experience], which is hosted exclusively on Spotify, is the world’s largest podcast and has tremendous influence. Spotify has a responsibility to mitigate the spread of misinformation on its platform, though the company presently has no misinformation policy.”

The musician added: “I want you to let Spotify know immediately TODAY that I want all my music off their platform … They can have Rogan or Young. Not both.”

A Spotify spokesperson confirmed to the Hollywood Reporter on Wednesday that the platform was taking down Young’s music.

“We want all the world’s music and audio content to be available to Spotify users. With that comes great responsibility in balancing both safety for listeners and freedom for creators. We have detailed content policies in place and we’ve removed over 20,000 podcast episodes related to Covid since the start of the pandemic. We regret Neil’s decision to remove his music from Spotify, but hope to welcome him back soon,” the spokesperson said.

Since the pandemic, Rogan, who has legions of devoted followers, has repeatedly spread misleading and false claims.

The letter highlighted a highly controversial episode from last December that features Robert Malone, a virologist who was involved in the mRNA vaccine technology that led to some of the leading Covid-19 vaccines but has since been criticised for spreading vaccine misinformation.

“This is not only a scientific or medical concern; it is a sociological issue of devastating proportions and Spotify is responsible for allowing this activity to thrive on its platform,” the letter read.