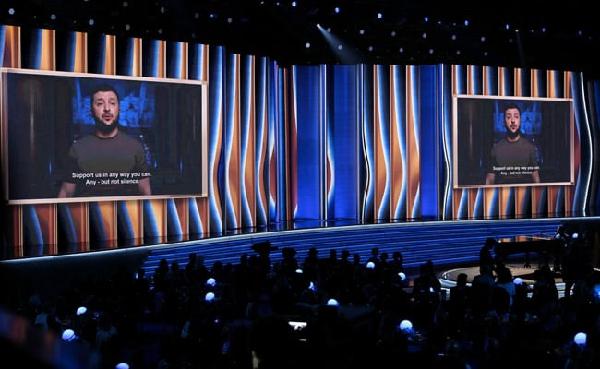 Ukraine’s President Volodymyr Zelensky made a special virtual appearance at the 64th annual Grammy Awards, where he urged musicians to “tell our story” during a powerful speech.

The Ukrainian leader delivered his message amid Russia’s ongoing attacks against his country. The message was recorded from a bunker in Kyiv.

“The war. What’s more opposite to music. The silence of ruined cities and killed people,” he said in an emotional message.

“Our loved ones don’t know if we will be together again. The war doesn’t let us choose who survives and who stays in eternal silence.

“Our musicians wear body armour instead of tuxedos. They sing to the wounded. In hospitals. Even to those who can’t hear them but the music will break through anyway.

“We defend our freedom to live, to love, to sound.

“On our land we are fighting Russia, which brings horrible silence with its bombs. The dead silence.

“Fill the silence with your music. Fill it today. To tell our story.”

The video message was played ahead of a performance by John Legend of a new song, called Free.

The US star was joined on-stage by Ukrainian musicians Mika Newton and Suzanna Iglidan, while a poem was read by their compatriot Lyuba Yakimchuk, who recently fled the country.

"Rain down freedom until we're all free" sang Legend, who was also accompanied by a gospel choir, as images of those affected by the conflict played out on screens behind him.

At the end of the track, viewers were given the details of a charity helping Ukrainian refugees.