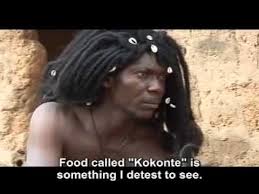 Veteran Ghanaian actor Agya Koo has made a shocking revelation about his role in the Okomfo Anokye movie.

According to him, he stormed out of the movie set upon the insistence of the director that he goes naked in a river, something Agya Koo said he vehemently argued and stood against.

"I was asked to go naked in a scene where Okomfo Anokye was supposed to take his bath, I decided not to do it because it was not right. The director then told me if I won't do it I should go, I spoke to them but they refused. I thought about what the next generation will say when they see me naked in that movie. What actually got me pained was a rookie in the movie industry took money and allowed his nakedness to be taken but when there is a close up then my face appears, so I called them and told them what they have done really hurt me".

After that incident, Agya Koo said all movie producers and directors in Kumawood ganged up against him and boycotted all films in which he starred or had anything to do with.

Below is the video