Video : Burna Boy sacks fan for refusing to dance to his songs 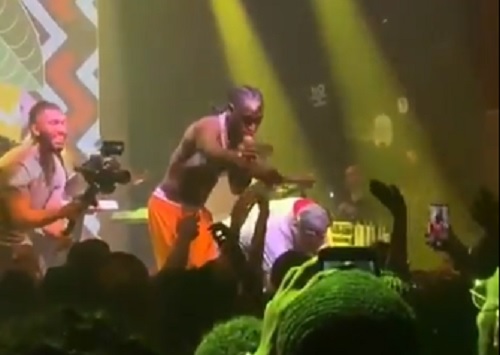 Nigerian music star Burna Boy has asked a fan in Atlanta USA to leave an auditorium while he was performing some of his hit tracks.

During the performance, the 'Dangote' hitmaker stopped and refunded the ticket fee to the fan for not dancing to his songs, according to him the act by the fan will bring him negative energy.

The “Ye” crooner appeared at 11:30 BST on the show which aired on ABC.

He made his appearance alongside Hollywood stars like Brad Pitt, Leonardo DiCarprio and Margot Robbie who came to promote their movie, ‘Once Upon A Time In Hollywood.’

As expected, the singer performed on the show to the excitement of guests as he sang his hit song, “Anybody”.

Atlantic Records signee is one of the many African stars that landed a feature on the Beyonce-curated album, the”Lion King; The Gift” for the live-action remake of the classic Disney film, The Lion King.

The BET award-winning Burna Boy is one of the Nigerians who made the recently released Forbes Under 30 List. This year’s list boasts 20 Nigerians including Guardian Life Cover Star Alex Iwobi, Adeniyi Omotayo, Jessica Anuna, Richard Akuson, Ijeoma Balogun among others.