VIDEO: Shatta Bandle throw down a challenge to Adebayor, Ayew as he scores penalty 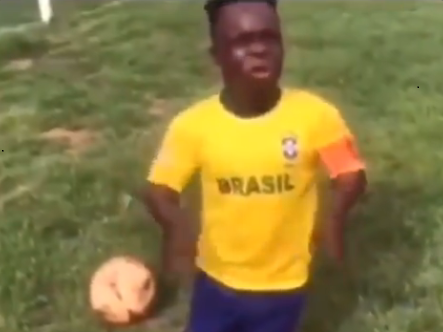 According to the braggart, his footballing skills are top-notch and if they doubt him, he has called them out to the green turf for the world to know who is the best among them.

In a viral video, Shatta Bandle bragged that it's not only about the amount of money he has but he is a quality player and hasn't signed for any team because his wages cannot be afforded.

He said: “it is not only the money I’m spending, I am a footballer too.”

“I have joined Ghana Black Stars, Wakaso and Dede but I play like Adebayor."

I have been invited to play with all these people.”

I have been being signed by the Ghana national team to play along with Mubarak Wakaso and Dede Ayew. Some people think it’s only about the money. And some other people say I play like Adebayo, but I want to show them that the young rich nigga can play more than them, you can’t challenge. Don’t compare me to others when it comes to playing ball. I don’t play for clubs because I have too much money, they can’t pay me. But I’ll play for Ghana in the next World Cup, Nigeria people too can buy me to play for them if only they can afford😂😂. #yonyonyonyonrichnigga