Video: You think Ashaiman is for you? - Kelvyn Boy quizzes after being attacked by Stonebwoy's former bodyguard 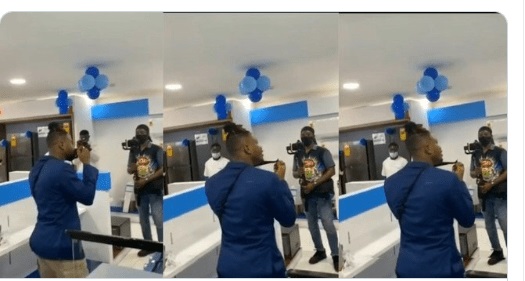 Former Burniton Music signee Kelvyn Boy was attacked at an event at Ashaiman by a man alleged to be Stonebwoy's former bodyguard.

According to Diddy who is Kelvyn Boy's manager the artiste was invited to grace the opening of Electroland Ghana Limited's new branch in Ashiaman.

While the Afro-beats singer was going around checking out the shop, Stonebwoy's former personal bodyguard stormed the shop with other guys to disrupt the event.

Stonebwoy‘s bodyguard who stormed the shop is known as Gyenyame.

Kelvyn Boy after the incident took to Twitter to throw a few shots suggesting that his former camp might be behind the attack.