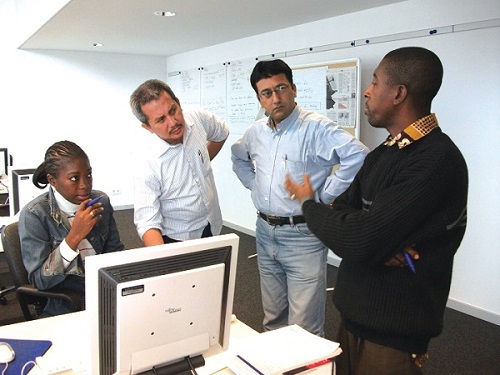 Well, in last week’s issue the end to my wahala in Germany began. I packed bags, headed for the airport, was booked on an early flight to Frankfurt, en route to Accra, Ghana, my motherland.

Hope it has been worth your while being with me on this wahala-filled trip. Abrokire Abrabo. My Wahala in Germany.

Fortunately, Susan, who was attending to my colleagues arrived just in time before I was put on the early flight and Wisnu appeared before I continued to the departure lounge to wait for instructions to board the aircraft.

So I was finally leaving for home? I realised that I was already feeling home sick just under three weeks. At last we were instructed to board the flight and we arrived at Frankfurt in about an hour to connect to Accra, Ghana.

How I almost missed my flight to Ghana

I noticed I had arrived in good time and so had a lot of time on my hands to ‘kill’. I was thus assured of my connecting flight back home. Little did I know that my wahala in Germany was not yet over.

Unknown to me my return ticket was a reserve ticket, which meant I was on standby and so my getting a seat on board a flight to Ghana was dependent on the availability of a seat on the aircraft. Ei! So what would I do if the aircraft is fully booked? Hmm!

So as I said, I did not know my ticket did not guarantee me a return to Ghana – it was a maybe situation. With this fact hidden from me as I did not scrutinise the ticket in my possession, I went window shopping on arrival at Frankfurt Airport, and shopped for the Global Refund Office to translate into some bucks, some refund forms from some purchases I had made in Berlin.

I then quickly rushed to the new gate, where I met a lot of fellow Ghanaians waiting for boarding and then heaved a heavy sigh of relief. However, it was when the flight had been announced and passengers asked to board that I decided to look at my seat number.

Imagine my bewilderment when I noticed for the first time that I had no seat number and that I was on standby. A call at the counter informed me that I needed to wait till the reserve list was mentioned.

So I waited impatiently for that list to be called, as I realised the dire straits I was in. No reserve list was mentioned and I saw to my chagrin that the other passengers were boarding the aircraft.

An eight-name strange list without my name however appeared on a monitor beside the counter which I initially thought was the full list of passengers that had been accepted to fill the vacant spaces on the scheduled Lufthansa flight to Accra. My heart did a somersault.

But as I watched that list in disbelief it continued to shrink till it got to three names on the list. It was then that I saw another prospective passenger who I overheard being told to wait and gathered she was also on standby, proceed to the counter at the boarding gate and realised I had to do something about my situation or be left stranded at the airport till only God knows when.

Lo and behold, I inched my frame towards the counter and met the outstretched arm of the attendant who took my standby ticket and replaced it without posing any question – I was given seat numbered 21, which meant I was going to sit close to the Business Class.

What! So what would have happened if I hadn’t approached the counter the time I did? The answer is plain simple – I would have been left to my fate – I mean stranded with no bucks in my pocket. Abrokyire abrabo, na wa oh!

The flight back home was smooth and uneventful and we finally touched down at the Kotoka International Airport at 4 p.m. Ghana time, having set off from Frankfurt, Germany at 10 a. m. German time.

After arrival formalities I proceeded to the conveyor belt at the arrival hall, waited awhile for my luggage, cleared with Customs and waited to be picked home by one of my older daughters Sally.

She finally arrived to pick me home, where I met the elder of my two little daughters, all dressed up to welcome me from abrokyire and sleeping because she couldn’t wait up for me.

The younger one (a baby) was rather wide awake but the welcome she gave me was stares and intermittent glances as if to ask me – where have you been daddy?

I must say it felt good to be back home. Home sweet home indeed and thank God my wahala in abrokyire is all over, at least for now, till I have the opportunity to travel again, I soliloquised.