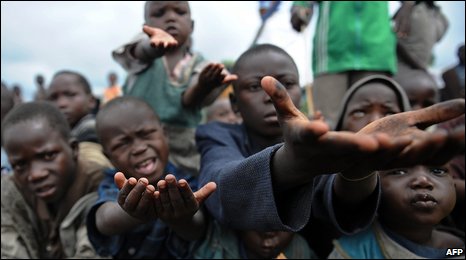 Sub-Saharan Africa has a comfortable prominence among the world’s most aid-dependent countries. Even the phrase “aid-dependent” is annoying. But perhaps over the years African leaders have not thought it annoying enough, or they would have shown leadership of the kind that would have evicted their countries from this shameful front row. At the very least it should have struck them as ironical.

Ethiopia depends heavily on foreign aid. It receives on average $3.5 billion each year in aid, yet The Economist reports that Ethiopians remain mired in the most wretched poverty.

Studies have shown a negative correlation between aid and human development in Nigeria. The West African giant has the largest population living in extreme poverty, with the numbers fast approaching 90 million.

A report by the Kenya National Bureau of Statistics estimated child poverty (that is prevalence of deprivation) at 45% of all children living in Kenya. Roughly 40% of Kenya’s 49 million people are living below the poverty line.

Africans boast happily, but probably no longer proudly, about being the continent most blessed with natural resources. Ours is the land of oil and gas, diamonds, gold, bauxite and cocoa. But the plain fact is that regardless of this wealth we are more dependent on aid than any other continent. Even more glaring is the irony that in spite of the high dependence on aid, our countries remain poor and our people poorer.

Which curse is worse: having too much, or depending too much on others? The Guardian newspaper reports that for every $1 of aid that developing countries receive, they lose $24 in net outflows. This reverse aid has been estimated to be about $200 billion a year, according to the United Nations Conference on Trade and Development.

Aye Mengistu Alemu and Jin-Sang Lee think otherwise: “The frequent criticism that foreign aid has not contributed to economic growth is flawed” they say in their seminal paper “Foreign Aid on Economic Growth in Africa: A Comparison of Low and Middle-Income Countries” (2015). They conclude that foreign aid has played a critical role in stimulating economic growth in developing countries.

The mixed responses should not surprise us. Extra cash is extra cash and regardless of how it is spent the fact of its presence paints a better economic picture, at least on paper. But more important a picture, in my opinion, is the fixed image of a poor population with malnourished and diseased children. The important question is whether in developing countries we are able to decouple the effects of aid from this unacceptable truth.

Ghana’s President, Nana Akufo-Addo, thinks an independent people have had enough of the dependence and over-reliance on aid which seems to be taking us nowhere. The President has gone beyond declaring a Ghana Beyond Aid agenda and put in place a plan to reach the goal. A Charter to this effect was launched at this year’s May Day celebrations by His Excellency. The fact that this Charter was prepared entirely by Ghanaians and funded by us, sets a good tone for the task ahead.

The Minister of Finance, Hon Ken Ofori-Atta, summarised the President’s vision succinctly in his “Good Bye Letter” to the Managing Director of the International Monetary Fund: “This transformation agenda is anchored in growing the productive sectors of the economy, boosting domestic revenue mobilisation, diversifying our export receipts to value-added products, and positioning Ghana as the Regional Hub for financial services, transportation, energy, fintech and logistics, while making Ghana a WISER Society (Wealthy, Inclusive, Sustainable, Empowered, and Resilient).”

The structure of Ghana’s economy has remained Guggisbergean since Guggisberg. Then, as now, it was driven by the production and exports of raw materials. Our modern economy has at all times been at the mercy of external price fluctuations. The Ghana Beyond Aid agenda must change this structure and help us progress from merely producing raw materials to making semi-finished and finished goods. It requires doing away with doing things “as usual”.

The government’s ten-point industrialisation agenda, which embodies transformational policies like One District One Factory, an integrated aluminium industry, the pharmaceutical, automotive, aviation industries, oil and gas and technology hubs, fertiliser plants and industrial cities, requires intense and inclusive action. All hands must be on deck.

Aid comes with strings attached to it. These are usually in the form of conditions and directives which cut down existing jobs, limit public-sector employment or even decide how an economy should be managed. It is a form of disguised dictatorship which has no regard for the prevailing social and economic circumstances. The statistics show that poor living standards and poverty become inevitable.

To break this vicious cycle, President Akufo-Addo’s government has passed laws to create bodies such as the Financial Stability Council and the Fiscal Advisory Council. Rules have also been put in place to check reckless spending and ensure prudent management of the economy. A Social Partnership Council has been launched to provide a mechanism for building a sense of cohesion, trust, and self-management through frank and open discussions about mutual sacrifices and contributions from all stakeholders to champion the cause of Ghana’s development.

Aid has undeniably supported many African countries but our leaders have tended to either mismanage aid money or, in some cases, it has been pure acts of corruption. In the end aid does not actually provide any aid to those who actually need it. But do African countries, given all our endowments, really need aid? If we don’t, and I don’t think we do, then is it not time to begin to wean ourselves off it?

The question is whether a robust and workable plan can be crafted and implemented to help achieve self-sustenance – and whether African governments will be fully committed to executing such a plan. To this end, President Akufo-Addo’s Ghana Beyond Aid Charter is welcome news. The Ghanaian people must embrace it and contribute towards making it work, and the rest of the continent must emulate its successes and learn from its drawbacks.