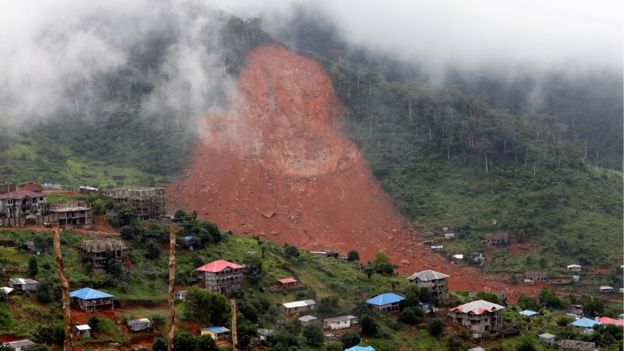 Ecobank Ghana Limited has added its voice to calls for support for victims of the Sierra Leone Mudslide disaster.

The bank is appealing to its stakeholders and the general public to make cash donations to support the Sierra Leonean government in the aftermath of the landslide.

Since the news of the disaster broke, corporate entities and governments have organised relief items and offered financial assistance to the country. Ecobank Ghana becomes the latest to organise some sort of financial support for the affected country.

The Head of Corporate Communications at Ecobank Ghana, Rev Patricia Sappor, speaking after the launch of the banks ‘Help Sierra Leone Fund’ pleaded with the public to donate generously to a worthy cause, urging the public to join hands with the bank to put smiles on the faces of all affected persons in Sierra Leone.

“Remember that hundreds are dead but thousands are currently homeless and in dire need of basic necessities of life such as food, clothing, shelter and psychological support.

Children in the affected areas particularly need your support now,” she noted.

Sierra Leone is currently racing against time to avoid further deaths following devastating floods and mudslides that have already claimed hundreds of lives, with hundreds also missing and many more rendered homeless.

The President has appealed for urgent help to support the thousands of people affected by this devastating mudslide which occurred on the outskirts of the country’s capital.

A national emergency has been declared after the city suffered heavy flooding, thought to be the worst in Africa over the past two decades.

Search and rescue efforts have continued throughout Tuesday, hampered by the country’s dangerous terrain and the sheer scale of the tragedy. The mudslide, which trapped residents while they were sleeping, is thought to have travelled for two miles. — GB