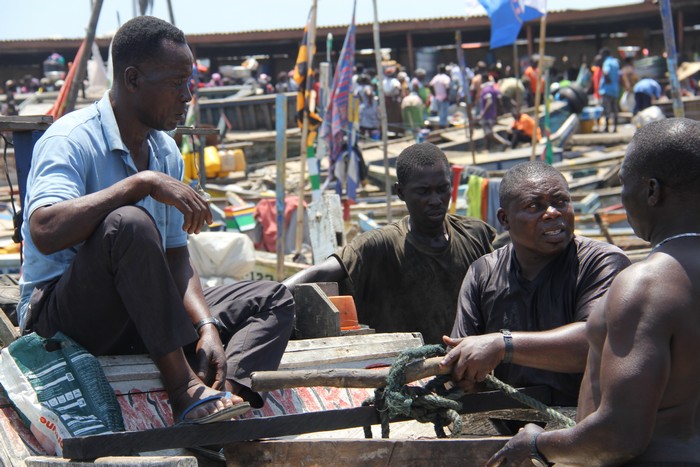 In a smouldering heat on a Saturday afternoon at Elmina in the Central Region, a group of young men sat on the edge of a rusty metal bridge, reflecting on life.

One of them, with a multi-coloured scarf around his neck, wearing black bathroom sandals and faded brown sleeveless shirt and a short pant, waved at some fishermen in a canoe approaching the shore from an overnight expedition.“There are no jobs so we sit around here hoping to assist market women with their goods for some money,” he said with a heavy Fante accent. 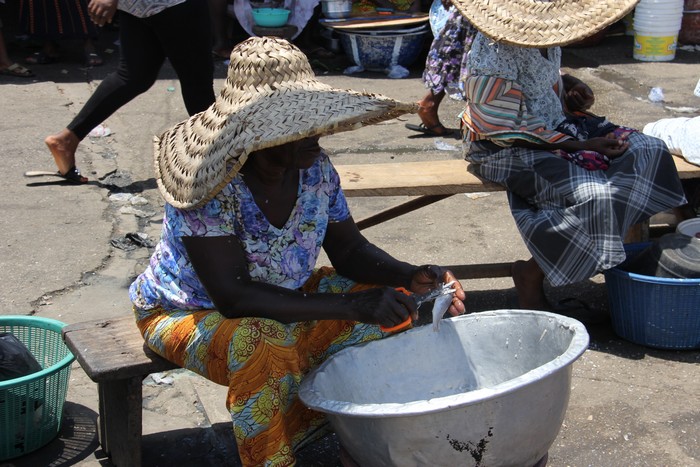 Elmina is the capital of Komenda, Edina, Eguafo and Abirem District stashed in the southern part of Ghana facing the Atlantic Ocean, West of Cape Coast, another slave castle. It has a population of about 33,000.  It was the first town in West Africa where Europeans took up residence, leading to the construction of the famous castle, which harbors memories of a gory historical past, where millions of captured natives were kept, branded with hot iron, auctioned before wine sipping white merchants before being cramped into rickety ships, and sent to the Americas as slaves. 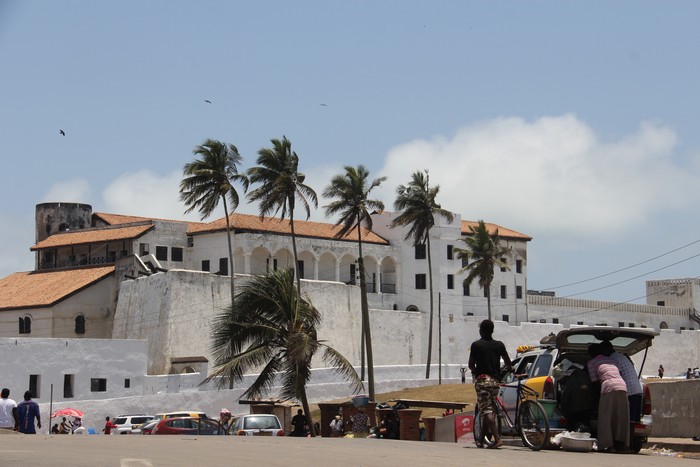 The dark history has become an attraction for both local and international visitors, who visit the place with cameras in hand, listening to the harrowing stories often narrated by tour guides.  Prices differ for both visitors and despite the amount of money often paid, the rippling effect on the local community is yet to be felt by-prompting some of the residents to defecate around the monument as a form of protest.

“There are so many young people in this community who could be engaged but look at them,” Ekow Sagoe, 34, told me, pointing in the direction of some residents attending to nature’s call in the view of tourists standing on top of one of the dungeons overlooking the Atlantic Ocean. 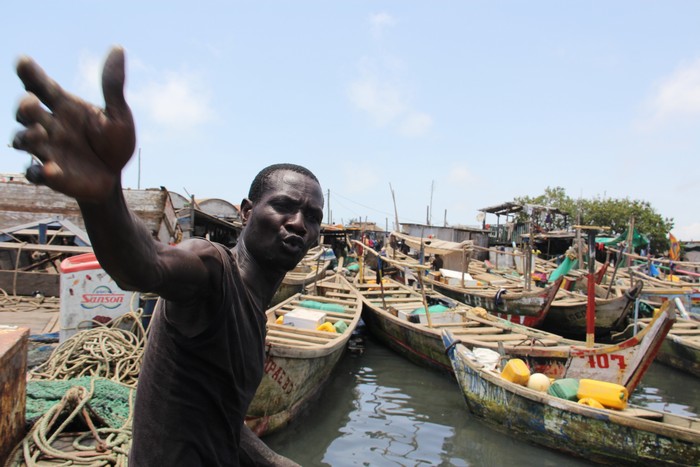 “I am not supporting their act but when people feel they do not have a stake in something, they care less about how it is managed and that is what we are seeing with the continues open defecation around the castle.”

Few meters away from the castle is a sea of canoes dotted on the main fishing bay lying on both ends of the ocean, which parts the market and the section of the town. The imposing Fort Sao Jago da Mina, which served as a military base where the slave merchants launched rockets at approaching enemies, now sits on a hill overlooking the canoes. The noise of aboard motors swells through the barking heat and amidst the singing of some fishermen trying to drill a nail into parts of a broken canoe together, the voice of a van selling medicine booms through a mangled public address system, cascading through the crowd of fishmongers trying to negotiate prices of crates of fishes fresh from the sea. 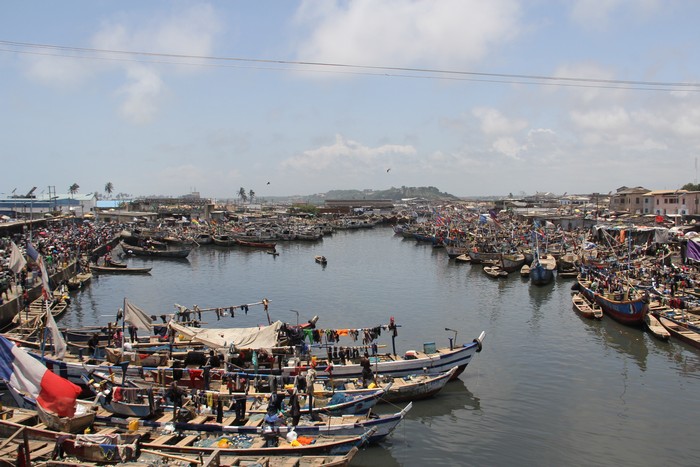 “The business has slowed down a bit,” one fisherman told me. “Light fishermen are still recalcitrant and the impact is being felt all around.”

Looking glum and unhappy, a sign the expedition for the day had not gone right, Kwesi Attah, 32, who has been fishing for the past ten years, said their concerns have not been addressed by their leaders, though they are aware of their situation. Despite his age, years of hardships almost give one the impression he could be older than the stated age.  He told me he has six children and a wife. Introduced into the fishing business by an uncle of his, Attah said he is determined to see his children go to school but dwindling nature of the fishing business means their future is uncertain. 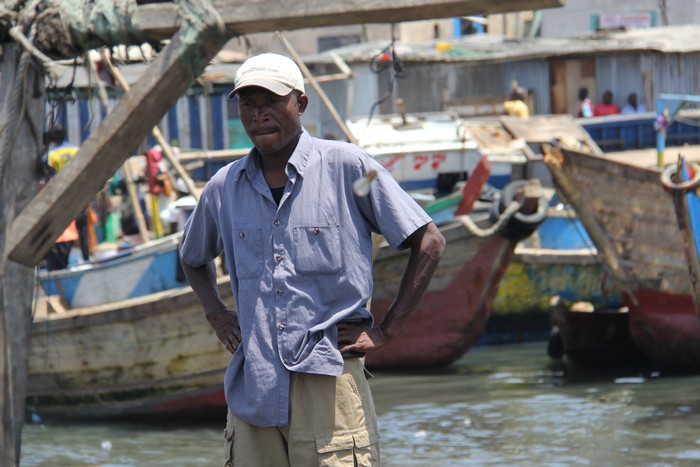 “I want them to go to school and it is my priority but they cannot be educated without money,” he said.

President Nana Akufo-Addo has prioritized education as a major component of the transformation agenda of his regime and has already started his ambitious free education policy, starting with first-year students who gained admission to various senior high schools in the country.

According to him, education should not be the preserve of the rich but every child from across the country, who is qualified to access the policy. 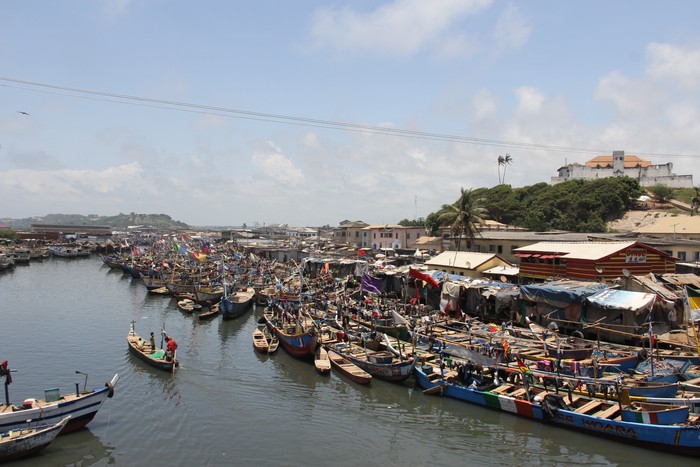 Ironically none of Kwesi Attah’s children are qualified for the policy so will have to cough the fees from his pocket, a situation he dreads anytime the month or even the term is approaching.

“It’s difficult for us, my brother,” he said.

Though records are not available to prove the authenticity of the claim, there is often the story that Dr Kwame Nkrumah spent his last night at Elmina before boarding a waiting ship which would take him abroad for his education and later political activism.

The historical wealth of this town which used to be known as Anomansah (the perpetual drink) cannot be over emphasized, but wrenching poverty has covered its beauty.