GTV's Napoleon Ato Kittoe writes: It's an NDC win, NPP will need to dig deep for a runoff 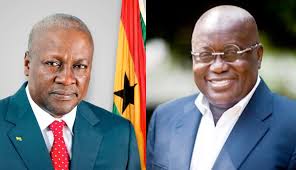 Ghana goes to polls tomorrow to elect a president and 275 parliamentarians.

GTV's Napoleon Ato Kittoe has delved into the how the election will and according to him, the opposition New Patriotic Party (NPP) will need to dig deep and win the swing regions of Western and Brong Ahafo to even force a runoff.
Below is his full article:
The elections will be decided on the fault line of the quantum of votes that each presidential candidate wins in each region and not just the number of regions won- I agree. Delving much into this kind of analysis this is where the election tends to reverberate towards.
Ashanti, all things been equal, having a voter turn up of 90 percent and won by NPP would be neutralized at most by votes from the Upper East, Upper West and the Northern Regions in favor of the ruling NDC. Don’t doubt this!
Then we come to Eastern which apparently will be won by the NPP come what may. The sad truth here is that traditionally Eastern has never been won en-bloc by the NPP. A huge chunk of votes come from the Kroboland, the Guan-speaking areas of Akosombo-Juapong and the Afram Plains that are all in favor of the NDC and this is what closes the gap between NDC and NPP in Eastern. Conversely, should votes from Volta be added to that of Eastern that are in favor of the NDC it will be much more than enough to fully neutralize NPP’s votes in Eastern and further catapult NDC into the lead. Remember NDC will win Volta en-bloc.

Votes from Central this time round will not be a battle ground but is what will fully land NDC in a comfortable lead. You don’t need to become a soothsayer to know that NDC will win Central by a significant majority.

Western, Greater Accra and Brong Ahafo are the three battle ground regions that will decide this election. Here let me quickly add that both statistics and history are not in favor of NPP winning Greater Accra in this election. Kufuor’s was a stray from the normal. Accra will always be close but NDC will win it paribus certeris. Count all the constituencies in Accra and be frank with yourself to allocate NPP where you wholly believe and know they will win and add the swing constituencies to their fold. You will still arrive at one answer-NDC still leads, look at these six large constituencies: East Legon, Odododiodio, Ashaiman, Domi-Kwabenya, Adenta and Madina. Just play it as it is and you will see how the permutation goes.

Most of NPP’s votes in there will come from the highly conurbated Twi speaking constituencies while that of the NDC will come from the traditional Ga areas. The permutation comes to just that single premise. NDC still leads in Greater Accra. Remember human beings are not like goats that change their minds overnight. No, not even for the promise of everything free!

So, the deciders will be Brong Ahafo and Western. Should NDC on one hand, win either of these two then the election is over. NPP on the other hand, will have to win both of these regions by a huge difference if they want to have reviving hope for a runoff. Even then runoff is another bitter battle for the NPP. Why?

As I have stated yesterday and this morning, I don't foresee that Nkrumahist parties like CPP and PNC will go into alliance with NPP. Such alliance will never happen, so in a nutshell I am beginning to see how herculean it will be for Akuffo Addo to ever win this election.

That is the sad truth folks …