'Is what we believe true?: Essence of objective reflection' by Anis Haffar 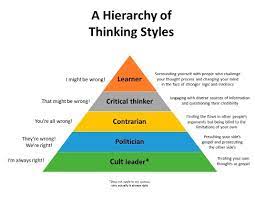 This is the last and final of the 10-part series on the “Universal intellectual standards for critical thinking”.

Except for this last part on “Objective reflection” to conclude the series, the rest of the nine concepts (Clarity, Accuracy, Precision, Relevance, Depth, Breadth, Logic, Significance and Fairness) were reviewed from a textbook - “Critical Thinking: Learn the Tools the Best Thinkers Use” - authored by Richard Paul & Linda Elder.
Construct meaning

Concepts are appropriate things to have and think about, especially when they are reduced to their lowest common denominator – buttressed with real examples – to aid understanding. I’m reflecting from very personal experiences from my elementary and secondary school days when, often, one was compelled to memorise concepts and theories by heart in order to pass examinations of the “chew, pour, pass and forget” kind.

I hated such archaic methodology with passion. I knew – even as a youngster – that that was not the way for me to be truly educated and effective. What saved me was my love of reading and writing, and my imaginative wanderings.

Throughout my years of teaching, and as of now, it’d never crossed my mind to pass on such drudgery to my students, both the young and old! Education makes sense for the long haul when one is allowed to be part of the learning process, thinking along in the flow and constructing one’s own meaning and judgements along the way.

Through our childhood, we have become so used to stories that many people tuned out any semblance of reason.

And as they say, if we were “to lift the veil of habit from our eyes”, it would dawn on us that the entire universe of ancient history contained only a mass of fantastic ideas, absurdities, rumours and farce.

For example, reading Latin in secondary school from the impressionable teenage years, I was fascinated by the grandiosities of themes we were taught.

One of those abound around the Appian Way. I was in Rome in 1977 with a map in my hands looking for the majestic Appian Way consumed in my youth.

Unable to find it, I accosted a tourist who also happened to have a map in his hands. He pointed out to me that actually we were both standing on the Appian Way. What I imagined to be a mind-blowing spectacle was the size of a driveway.

Again, a relative of mine was to point out, having gone to see it, that what was so glorified in religion as miraculous as the parting of the Red Sea – as magnified by Charleston Heston as Moses – could be crossed as easily as between here and there – pointing from a point A to B in a yard. It’s clear that stories were meant as stories but not history. But some things had been so magnified out of proportion. These days, stories have been unduly monetised in the hands of particular people donning robes and other regalia.

It’s been said that “men see marvels in proportion to their ignorance and lack of experience”.

Thus, the first men were exposed to many wonders, and since fathers – for example – naturally relay to their sons what they have heard, seen, done or thought, over time these accrued as nothing more than tales passed on from one generation to another.

Add various degrees of added pitches, hearsays, innuendos, etc., by the time the original tales reached down the generations, they had been polluted beyond recognition.

Trying to understand what lies behind time, eternity and space gives even the best of thinkers splitting headaches.

So it boils down to a choice between critical reasoning and fantasies of the outlandish kind. Hidden from the human’s puny brain and perception is all that is true.

An experiment was conducted where a clear statement was made to one person and retold into the ear of the next person in a long queue.

Finally, by the time the last person retold the statement back to the first person, the original statement had been so misconstrued out of proportion.

What would stay true in appreciating the integrity of the universe and the origins of mankind? Before the gaps in proper understanding are filled, pure adulterated ignorance and sketchy allusions have filled the vacuum.

Descended from centuries upon centuries of “holy” fabrications, the reality is buried in a heap of potash.

In the end, some religions — like imperial warfare — are nerdy fantasies in stiff competition with one another in the battles to win hearts and minds for control purposes.

According to Adam Grant in his book “Think Again”, the cult leader thinks he is always right and treats his own thoughts as gospel. The politician preaches his side of the gospel and prosecutes the other side’s.

The contrarian finds the flaws in other people’s arguments but stays blind to the limitations of his own thinking.

The critical thinker engages with diverse sources of information and questions their credibility. The lifelong learner surrounds himself with people who challenge his thought process and changes his mind in the face of stronger logic and evidence.

For a thinking person, there’s really only one big choice to be made in life: and that is to find out if what you believe is true. Imagine living your whole life on a belief that is false!

The challenge – for any person who chooses to think well – is to be radically open-minded; and start by looking at one’s own self objectively.

The writer is a trainer of teachers, a leadership coach, a motivational speaker and quality education advocate. E-mail: anishaffar@gmail.com