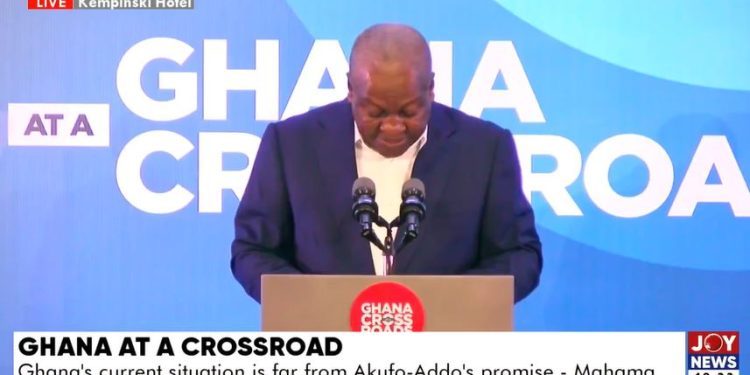 I don’t think there is a Ghanaian above 10 who does not know, or has not known since mid-December 2021 that John Dramani Mahama will contest the 2024 elections, and I would if I were him.

Anybody who goes into an election and realises that he has lost by only 515,524 votes – a far better performance than a previous heart-sinking margin of 1,002,749 – will yearn for a re-match.

If one million more people did really vote for JDM in 2020 than they did four years previously, he will be a fool not to throw his hat in the ring for the third time.

For the NDC candidate, it is history in the making. If he does win, he will be the only Ghanaian – nay, perhaps the first politician – to have ascended to the presidency, lost it, reattempted, failed twice in succession and gone on from there to win on a third successive try.

If he does clinch this, his previous record of rising from Assemblyman to MP to Deputy Minister to Minister to Vice-President to President stands broken – by himself.

Mahama not only read History at the university; he makes history. He is also the first person in the world, since God created Adam, to have gone to court without evidence!

With his fate foretold by no fewer than three Ghanaian prophets, John Mahama decided he would be nobody’s fool.

He would lift the Akofena Presidential sword again to take the Presidential Oath. He would sit on the Sasagua again.

He walked out of the Supreme Court a loser after 41 days and immediately went on the offensive - though Yours Truly felt that against the judges, Mahama was landing very low blows.

Reason is that I was, and am, convinced that Mahama was not surprised by the result. He had no case. His tirade against the judges was for the benefit of his party supporters.

With an economy reeling and an NPP struggling to turn wishes into horses, Mahama does not even need to work hard to paint the incumbent as incompetent and point at himself as the only Messiah, never mind that in his own previous incarnation as President (2012-2016), he was less than successful.

Meanwhile, inside the NDC, his re-election is signed, sealed delivered. In that party (at least, as of 2022), any contender will have to come against a formidable, almost impregnable fortress erected by the General Secretary Asiedu Nketsia and Chairman Ofosu Ampofo. In the USA, you “don’t mess with Texas”; in NDC, you don’t mess with these two.

Any important visitor or delegation that wants to talk with the NDC is ushered into the presence of Mahama. The TV lights are turned on, and cameras roll.

You can’t question it: in the party’s ranking order, the last presidential candidate is leader of the party.

By this arrangement, Mahama has become the spokesperson for the NDC and naturally the leading opposition voice.

By the first week of March (long before, actually) nobody in the party had any doubts who was the party’s choice for President. Within the party, the feeling is that “there is really no credible alternative.”

For the time being, the Mahama election machine has been turned on. The release of the Economic Intelligence Unit polling result that showed NDC as the likeliest to win 2024 was the elixir the party needed to stir itself up.

Everybody who has witnessed campaigning in the last three elections knows what it means when the Mahama machine barks.

It is a fearsome animal that sends chills down the spine of competitors. Servicing that machine is a relatively young crop of politicians who are dangerous by their age and their brains.

Their teeth are sharp. They have a strong research base that patiently gathers facts and figures and releases them to the right media.

Articulation is their forte, a communication team headed by the Election Generalissimo himself. Once very often, he goes into long tirades but usually his most effective body blows are short effective radio and TV sound-bites, in clear, unambiguous language, and they pierce like pin-pricks. The biggest advantage of his team is that they know and speak the language of the street.

But the NPP is not impressed.

They are not afraid of “kakai” because for them, the only reason it is so called is that is what the word actually means: a mere phantom. They only have to unmask him.

The writer is Executive Director, Centre for Communication and Culture.