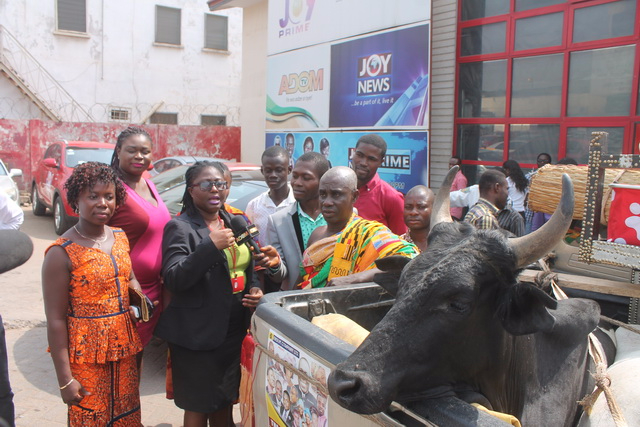 The Multimedia Group has a comprehensive election coverage project dubbed Election Headquarters. From the Election Day until the results are announced, almost all employees of the company play a role. All of the company’s resources are also put to active use, especially the telephone lines.

This year, I did not go out. I worked in one of the background teams. In my team, each of the ten regions had a dedicated telephone line so when the phone rang, the person manning that phone automatically knew which region that call was coming from.

This was not the case for one of the dedicated phone lines. Most of the calls that came through this line came in the evening, after 7:30 PM. Was that region the busiest in terms of activities? The answer is no.

We later discovered that line was one of the known Multimedia lines. And the calls in the evening had nothing to do with elections. The callers were viewers of Adom TV’s Kumkum Bhagya programme, an Indian telenovela in which the characters’ words are voiced over in Twi.

The callers, some of whom sounded very impatient and angry, wanted to know why Adom TV was not showing Kumkum Bhagya in the evening of December 7. Those in charge of the phone apologised and explained to them that the station was covering the presidential and parliamentary elections.

“Yesterday you didn’t show Kumkum Bhagya and today too you are not showing, why?” one caller said angrily on December 8.

It sounds strange that someone would want to watch an Indian telenovela instead of the live update of election results. To some people, however, Kumkum Bhagya is a matter of life and death. In January this year, a pickup vehicle carrying a fat cow parked at Multimedia.

The Chief of Assin Asaaman in the Central, Nana Kwasi Wadie Esly II, had arrived with his Linguist, Okyeame Kwadwo Gyekye; his wife, Mabel Maku Wadie; and his sister, Atsu Agbey. The chief said he had come to fulfill his promise to the management and staff of the Adom TV for introducing the Indian telenovela.

“In fact, I become very excited anytime I watch persons of Indian origin speaking Twi…what really attracts me to watch the series is that the characters speak pure and unadulterated Twi and I can’t really find words to describe the moral lessons in the telenovela…I am very grateful to Adom TV for this…” Nana Kwasi Wadie said .

On occasions such as election night, it is easy to predict that everybody’s interest will be the election. But I was shocked to realise that was not the case as call after call came from viewers who were disappointed that Adom TV could not serve them dinner.

This raises the serious question about what drives media content? Should media owners give their audience what the audiences want or what the media owners think will be beneficial to their audience? This question has divided and continues to divide opinions since Viasat 1 television decided to grant Rashida an interview.

For those of you who landed from Neptune last night, a little background will help: Rashida is a teenager, a junior high school leaver from Berekum in the ‘Bono’ Ahafo Region of Ghana. A few weeks ago, a video she had recorded with her mobile phone became the toast of social media.

In that video, Rashida, who calls herself “black beauty,” claimed her boyfriend by the name Kushman had jilted her and had gone in for a senior high school girl. This infuriated her so that video was a recording of abusive words directed at Kushman.

She insulted Kushman, and did not spare his mother. She did not end there. She revealed in the video that when she met Kushman, he didn’t know how to have sex properly. She bragged about her sexual prowess and how she taught Kushman to have proper sex. Yes, she is a junior high school teenager.

Persons living with albinism would not take her insults lightly because she verbally abused her ‘albino” ex-boyfriend, mocking his skin condition. She repeated the swear word “mother f***er” several times but because she could not speak English and did not know how to pronounce the word, it came out as “malafaka.”

The first mainstream media on which I heard Rashida’s insults was on the Weekend City Show on Joy FM. Even though that show looks at the lighter side of life, I believe it was irresponsible to have played those insults on radio without editing. Besides the fact that children might be listening, many adults may find it offensive.

A few days later, Viasat 1 TV interviewed Rashida. This did not go down with some viewers. One of such persons was Lawrencia Elikem Zigah who condemned the TV station’s action on Facebook:

“The media and some nonsense they promote. A few weeks ago a girl by name Rashida recorded herself insulting her ex boyfriend and today she has become very relevant that Viasat 1 has put her on TV. Really? You are giving her airtime because of those insults? Hmmmm.”

As the controversy raged on, Viasat 1, held its Jigwe Awards on Thursday and invited Rashida to receive the Viral Video of the Year award. For her prize, she got an investment of GHc2000 or $500. This amount is close to two years’ salary of a Zoomlion worker who sweeps the street. (They take home GHc100 a month, out of the 500 allocated to them each month from the tax payer’s purse).

When Rashida mounted the stage to pick award, she indicated that she could not speak English Language, the main language of instruction in primary and junior high schools in Ghana. She said she would speak Twi, and went on to repeat some of the offensive words on stage.

The Jigwe awards have stoked the debate again. Some people think the TV station erred in “celebrating” Rashida. Others, on the other hand, see nothing wrong with it. To them, people should look at the lighter side of life. It is not likely that either side of the debate will concede easily to its opponent but the best way to look at this issue is to personalise it.

Our elders say a drum can sometimes sound differently from what its maker intended. So if my daughter goes wayward like Rashida: that at the junior high school level, she has mastered the skills of sex and is teaching men; that at that level she cannot speak English Language; that at that level, she doesn’t feel shy to tell the whole world about her sexual encounters; that at that age she has a tongue that is sharper than the edge of a circumcision blade and can insult like nobody’s business; what will I do?

That is the best way to look at Rashida’s situation. See her as your daughter or sister. She’s a vulnerable girl who needs help. She needs rehabilitation, not celebration.

The persons and media houses that encourage her now probably see her as a tool drive audience and to make money. They will exploit her vulnerability. They are not helping her. They have thrown an innocent and defenseless lamb into a den of hungry wolves. The entertainment industry is replete with debauched men who will take advantage of her.

Rashida is not a star. She’s not a celebrity. She is not a role model for young girls in her community. Let us not convince them that the best way to get to Accra and be on TV is to have sex and flaunt it or to master the art of verbally abusing others. Rashida is a deviant who deserves our sympathy, not our praises.

Our elders have taught us that everybody loves a fool, but nobody wants him or her as a son or daughter. Those who say there is nothing wrong with what Viasat 1 has done should go to that station. They should ask the management, the presenters and members of the team that took the decision to include Rashida in the Jigwe awards whether they would do that if she were their daughter or younger sister. If they are men and women with conscience, and are truthful to their conscience, they will say no.

It is true that media content is driven by audience demands, but media owners have a responsibility towards the decency and development of the society. Sometimes the demands of the audience are driven by what the media feed them with. Some people cannot sleep soundly without seeing Kumkum Bhagya, but until Adom FM introduced it, they didn’t know about it.

If I had dated my wife in Kete-Krachi and married her and lived with her there, there’s no way she would ever demand pizza. Why? There’s no pizza in Kete-Krachi. And she would certainly not demand what she does not know exists.

The writer, Manasseh Azure Awuni, is a senior broadcast journalist with Joy 99.7 FM. His email address is [email protected] The views expressed in this article are his personal opinions and do not reflect, in any form or shape, those of The Multimedia Group, where he works.