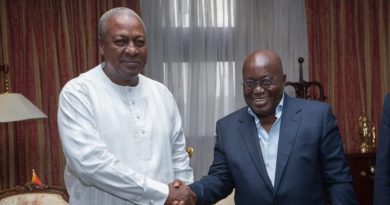 Last week, many of the NDC supporters who said their party was more united than the Holy Trinity are suddenly realising cracks and divisions that had been there for a long time. They are blaming the leadership of the party for not addressing them. The “blamestorming” has started, especially on social media.

A certain Jerry John Rawlings, we were told, had outlived his usefulness and had lost his impact. Today, they say you cannot sideline the founder of a party and succeed.

Those who defended everything their party did and said there was no reason to vote them out are suddenly saying they saw their defeat coming. All of a sudden they are realising that their “flawless” party and government had flaws, which they failed to address. They seem to know why they lost, but the NPP do not seem to remember why they won.
The NPP told us to vote for them because there was massive corruption, unemployment, mismanagement and a plethora of problems confronting us. They told us to give them the chance to change or fortunes. Now that they have won, they say they won because of their vigilance and their collation centre. They trumpet this as if Ghanaians had not voted massively for them, their vigilance would have made any difference.
They say many people in the Volta Region did not vote because John Peter Amewu and others stopped rigging and prevented foreigners from coming in to vote. But there is no evidence that any single person was stopped from crossing to vote. The people of the region simply did come out in their numbers to vote.
Apart from Ketu-South, there is no constituency in the Volta Region with a major border town that could be an entry point for any significant number of foreigners from Togo. The fact is that a number of people from the Volta Region were not happy with the performance of the NDC government. They could not afford to vote for the NPP because of certain utterances and attitudes by some members of the NPP that seemed to alienate them. But they also would not vote for the NDC.
In the Krachi West constituency, for instance, the gap between the NDC’s John Mahama and the NPP’s Nana Akufo-Addo was blurred. President Mahama won 10,516 votes while Nana Akufo-Addo won 8,773. This is the hometown of the Volta Regional Minister, who also contested the seat. When I was growing up in Kete-Krachi, people were ashamed to associate with the NPP.  In the Krachi East Constituency, the NPP snatched a seat from the NDC. These constituencies are not border towns.
In the coming days, we will expect the NDC to be rational. They will get real and realise that there are problems confronting Ghanaians that need to be solved. This is because politicians are often at their best when they are in opposition. But the NPP is likely to forget about what they preached yesterday.
My elder brother often says that the alcoholic content in power is 80%. That’s why we say politicians never learn. They learn but when strong wine enters the head, years of learning and decades of experience and wisdom evaporate.
It may be too early, but let’s remind the NPP why they are longer called an opposition party. Let’s pray and hope that the NPP will remain sober and remember why Ghanaians chose them: a party without money to buy votes, a party without projects to flash around, a party without limitless cash to buy out media space and a party without the control of state agencies. May the alcoholic content of power not cause them to forget why Ghanaians settled for one of the most vilified politicians in our recent history. May they not forget that we no longer have too a short memory to recall what we will be subjected to before December 7, 2020. At least, there is a certain Samira Bawumia who will be kind enough to remind us what to remember when we get hold of the ballot paper.
And we will not forget!
The writer, Manasseh Azure Awuni, is a senior broadcast journalist with Joy 99.7 FM. His email address is [email protected] The views expressed in this article are his personal opinions and do not reflect, in any form or shape, those of The Multimedia Group, where he works.