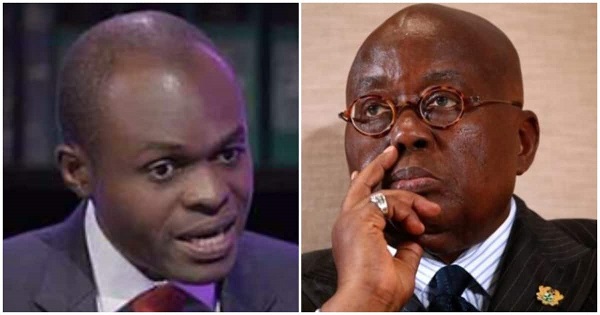 President Akufo-Addo this week was trending for what some may say the wrong reasons despite the commissioning of some projects in the Ashanti Region.

This is because of a comment the President made in his reaction to the resident of Afigya Kwabre calling on him to fix their roads.

A statement that led to Martin Kpebu questioning the state of mind of the first gentleman of the man.

Well, one thing generally with some Ghanaians is that they think they are entitled to freely speak their mind without you clapping back at them.

Let's delve into the matter, Akufo-Addo on Thursday, October 17 stated that he is unmoved by threats to vote out his new Patriotic Party.

According to the President, threats by Afigya Kwabre residents of voting against him or the NPP in the next elections if their bad roads are not fixed is a personal decision which he cannot be bothered about.

“No problem,” adding: “I’m saying people make those kinds of threats; me, they don’t frighten me,” he said.

“Somebody votes for you, somebody supports you because they want you to do things for them. I understand that. There’s no need for people to threaten that: ‘If I don’t do this, then that and that’,” the president noted.

Asked if he will fix the road nonetheless, Akufo-Addo answered: “Of course, I’ll do it but if it comes to voting and you decide to vote for the NDC, it is your own matter, it is not my business.

Private legal practitioner Martin Kpebu on TV3's Key Point programme went overboard in his reaction to the President's comment and needs to be called to order.

It's quite funny he thinks he can talk to the President, but the latter cannot back when people 'threaten' him.

He said: "Anything can happen, Ghanaians must understand that this is democracy and someone has to die, the tree of democracy is watered to patriots and villains. So those of you out there you can talk in your circles but are not willing to step out, you are the problem.

31millions Ghanaians we cannot all be scared, we can't all be silenced what does he take us for, who does he think he is?

When I read the statement I was is this man okay? What kind of arrogance is this? We feed you ...

As for death you can lie in your room and die, so those of you out there who don't want to pay any price, please let's get up."

One may ask what is Martin Kpebu implying?.

It's not too difficult to comprehend what the President said. He said he will fix the roads and there is no need for people to issue threats. This is simple!

What does Kpebu mean when he quizzed the President whether he thinks he is scared of him?

Nowhere in the President's interview or any of his interviews has he threatened Ghanaians, so for Kpebu to go that tangent is unnecessary and below the belt. He should know better.

Moreso what does he mean by the statement "Ghanaians must understand that this is democracy and someone has to die, the tree of democracy is watered to patriots and villains"?

Kpebu further called on Ghanaians to die for the nation, if I may ask in what way? Is he saying the citizens should stand up and go to war?

It is true things aren't going well in the country but that does not give citizens like Martin Kpebu the right to talk to the President anyhow.

In conclusion, just as the President said you have the choice to vote for any party,  in as much as governments will do their best to win your 'thumb' you are the only one on election day who knows where your vote will go.

We shouldn't kid ourselves, governments have been threatened with the tag, we will vote you out if you don't do 'a, b, c, d,' they go ahead and do all these things and are still voted out.

Let's be civil when addressing the Presidents.