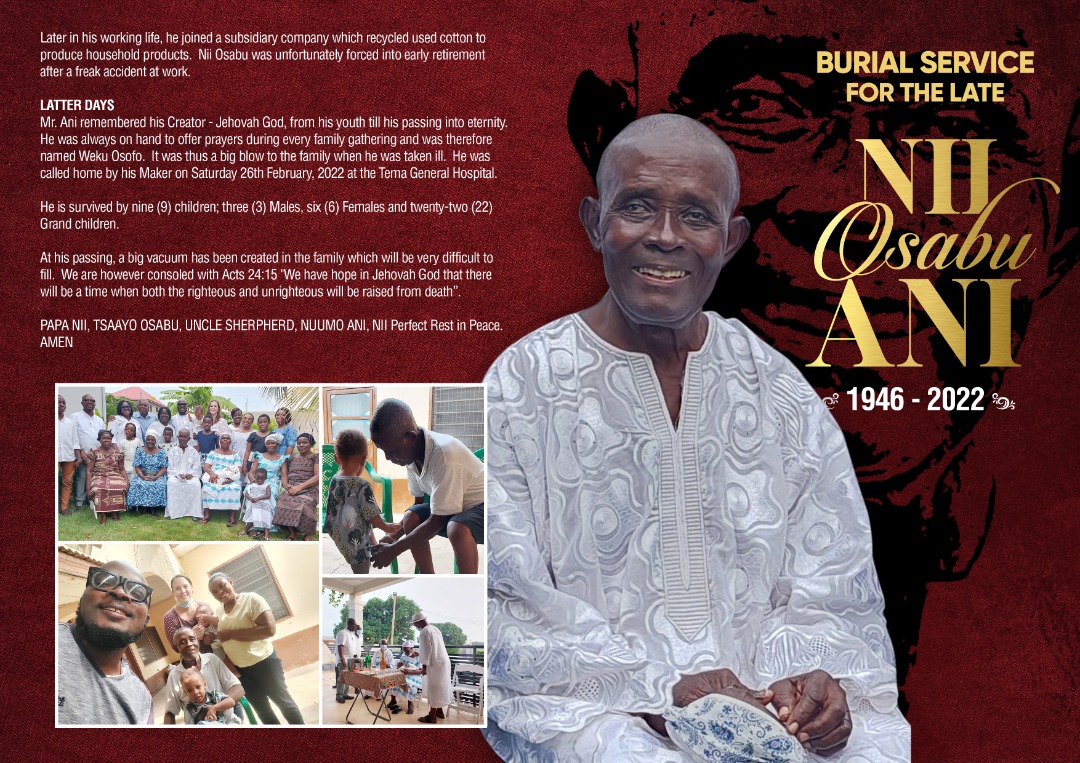 On the VERY day my father died, in February, I was on my way to the beach with my two boys, nieces and nephews, to soak the breeze and surf. I love to surf.

The ocean is one of the safest hideouts for me, and, anytime I am in the water and the waves crawl around my flesh, I feel whole.

As a teenager, I could roam around the beach until a stick came chasing after me to go home. Prior to that Saturday, which was the Thursday, I had gone to the hospital to see my father. His health was deteriorating fast, contrary to what we had all hoped was going to be a routine check-up and would be home. He was in so much pain and helpless.

This was a man who could walk without getting tired, even at his age. He was always up and running. But ill health had caged and made him immobile, leaving him between the jaws of life and death. He was a fighter, but fighters do have their slips and he had his, sadly.

The report I got was that he died in the morning but was told in the afternoon. The post-death paperwork delayed but when the news got to me and other siblings, some within the family had gotten the information.

It was a sombre period for everyone. His deteriorating health was not a secret to many in the neighboured, but his passing shocked them, because he was like one of them. He had a deeper insight into herbs, something he picked from his own father, and would treat people with all manner of ailments.

He helped me a lot with those herbs during the peak of the covid pandemic, because I was always on the road and considering I had a then six- or so-month old baby, he was worried about the baby’s safety, especially. Sadly, when sickness banged at his door, he did not have anyone with deeper insight into herbs, to assist him.

Following announcement of his death and the funeral rites, I saw familiar faces I knew but had no idea we are from the same family, or even are related by blood.

“Oh this is your cousin, his mother is your father’s bla bla blab la,” I was introduced to a guy I know very well, because we sometimes ride together to work. I have known this chap for more than a decade. We both had no idea about our family connection because there was no indication like that. Before coming to about five years ago, he was living in Kumasi as a regional manager with one of the country’s private banks. We are both Arsenal fans and our conversations are often lamentations, especially if Arsenal had lost a game.

He knew about my father but did not know if I had any connection with him. But everything was settled in the funeral brochure, which we had to again amend.

But one that really intrigued me was this lady who I connected with on the phone during the covid lockdown. She was at the funeral and later turned out to be the daughter of my uncle. I am still not sure how she got my number, but I suspect my number was caught in the many toll-free lines government put out for the public to call for food assistance.

My phone never rested. I could get about fifty or so missed calls in 10minutes. It was frustrating. The few times I picked the call and told them “wrong line,” I got insults and curses. I remember a lady called from Kasoa and told me to shush the food into my a**. I had had enough.

I switched off the phone for about three or so hours. I put it back on the calls kept coming. I decided to pick the next call that came in and it was this lady, a single mother with two boys. She had lost her job and was low on money. One of her sons was unwell and needed medical attention. She also needed money to buy food. I sent her money and wished her well.

A mutual friend had asked her to accompany her to a funeral in Prampram. It was my dad’s funeral she was coming to. She got hold of a copy of the brochure which had a family group photo including my uncle. She pointed to him and said, “this man is my dad.”
My uncle corroborated her story. We both shook our heads and laughed.