Opinion: A race must always be finished - Memories of Mfantsipim headmaster Joseph Abruquah' by Anis Haffar 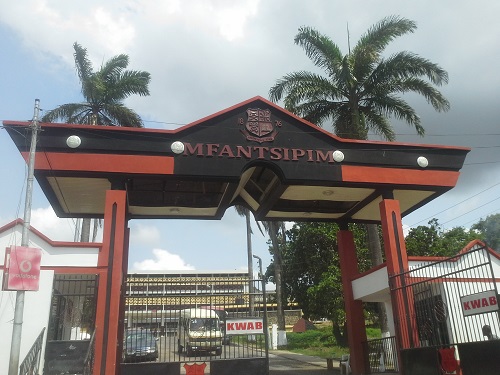 Had just arrived in Cape Coast from Accra and decided to visit Mfantsipim, my old school on the Kwabotwe Hill. Having taken the Kotokuraba Market route, I entered the school from the direction of the lower dormitories.

Driving up, I noticed an unusually somber atmosphere with a few cars and some people staggering up the hill to the academic blocks. Further up towards the assembly hall, it now dawned on me that a funeral was in progress.

I found a spot to park my car and followed the small crowd into the hall. A casket had been mounted in the centre and peering into it, there lay Mr Abruquahâ€™s corpse. That was past mid-day,November 27, 1997.

I hadnâ€™t seen Abruqs (as we used to call him) since I left the school in June 1966. Regardless, there were particular people we thought would live forever and to now see Abruqs dead, and readied for burial, was a bit too much to take.

I was shaken by the rising tide of manâ€™s mortality.

While the service was ongoing, I scribbled on the back of the funeral brochure bits and pieces of memories of the man who had served as headmaster in my impressionable teenage years.

The resulting tribute was published in the Daily Graphic on March 11, 1998. I was soon to receive a phone call from an editor of the Ghanaian Times for permission to re-publish it.

He had read the tribute and as it was, Abruqs had served as his headmaster also at the Keta Secondary School where a house was named after him.

The 15-year-old Abruquah was admitted to Mfantsipim in 1936 where he built his secondary foundation. Before returning in full bloom as headmaster in 1963, he had made his rounds at the Wesley College, Achimota, Kings College (London), Konongo Odumase and the Keta Secondary.

Though he walked tall with solid shoulders and sported the familiar well-trimmed moustache, he could neither hop to Millie Smallâ€™s â€œMy Boy Lollipopâ€ nor bout with The Beatlesâ€™ â€œTwist and Shoutâ€, the very lifeblood of the rhythmic youth of the 60s. On that basis, it was decided that Abruqs was not with it.

In retrospect, Mr Abruquah was at his peak and at the mature age of 42 had returned â€“ with a great appetite for life - to head the great institution on whose hearth he himself had been nurtured.

He taught Geography in Form 3A and at the end of one particular period, to absorb more of his time, I ventured to fall into step with him.

Now I had to think quickly of some classy remark. Having conceived one on the tip of my mind, I launched it.

He cleared his throat and in a deep but coherent voice, probed for the finer hues in my demand. It dawned on me that he hadnâ€™t simply framed a short cut and answered any old question. That act of tiny intimacy has lived with me to this day.

Like the first-class teacher and a literary artist, he sought for precision, in bits, largely awaiting with humility and patience the dawning of a new clarity.

By the time we had settled on the nature of my uneasy request, we had covered much more than the ground between the class and the assembly hall. I returned to my mates elated.

One weekend, the school was engaged in an athletic competition among the houses. Though not a great runner, yours truly was in a group running 440 yards feverishly for the Pickard House.

Soon enough, the best runner stormed past and tore the finishing line; others braved through and won their respective points.

The healthy conceit of the winners was established. The applause echoed and died off; and a heavy sense of finality brooded over the race. For all intents and scores, the contest was over. What were the rest of us â€“ our heads banging backwards in sheer exhaustion â€“ still drooping along in the field for?

Couldnâ€™t we be less masochistic, keep faith and determination on easier terms, and quit right here and now?

For me, the vigour from the start had now weakened for a slow jog, and what was left of my opening stamina was fast fading into a walk, the kind of fatigue that happens just before you quit a race.

Mr Abruquah - sound hearted but perched on the dais like an eagle teaching its brood how to succeed in the bigger game thereafter - was watching this race to see the very end of it.

He cast a glance in my direction and detecting that I was about to quit, shot a sterner look at me to finish the race at all cost.

Naturally, he was interested in who won. But what he really cared for were neither the firsts nor the lasts of the competition, but the habit of mind that when we started a race, we must finish it.

This business of trial and perseverance built the very landmark in character formation, the stage in self-efficacy that must develop before any progress is possible.

Speed may not always be as central as the will to keep body and mind focused on the target. The bigger picture, which was elusive then, was Abruqâ€™s greater conviction and settled sense of responsibility in making winners of us all.

For all the saints

In his leisure hours, he wrote two books â€“ â€œThe Catechistâ€ (which was used as a literature text) and â€œThe Torrentâ€.

Besides the fondness for reading and writing, he loved agriculture and gardening, and encouraged students to plant citrus fruits in the valley behind the Administration Block which the pundits named Orange Free State.

At the funeral service, my mind flashed back in specks to the old familiar places, and how the drama of the life we shared with him was now partly summarised in a casket. Halfway through the service, the old boys were called to the body to sing the school hymn, â€œFor all the saints who from their labours restâ€.

Those who had tears and could not master their grief, prepared to shed them.

The tall robust figure emerged in my thoughts sporting that cheerful moustache and flaring his commanding mien over the educational landscape in Cape Coast, on the last leap in his gallant journey through life.

It was too late now to have told the headmaster what we owed him and how we revered him. He had proven his station by beaming his light on small lives that otherwise would have remained hidden.

The writer is a trainer of teachers, a leadership coach, a motivational speaker and quality education advocate.