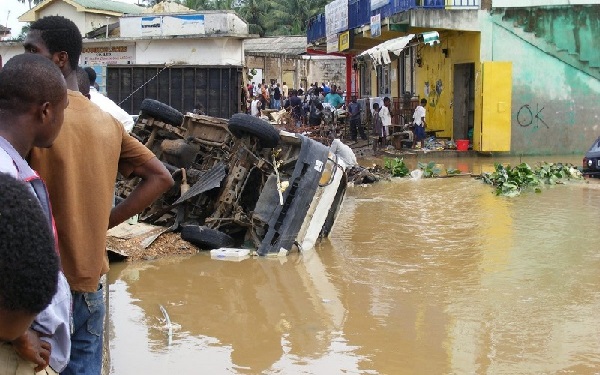 Flooding also impacts adversely on the mental health of victims, and undermines their ability to contribute meaningfully to economic growth.

Ghana ranks highly among African countries that are most exposed to risks from multiple weather-related hazards. In the past three decades, the country has experienced seven major floods. The devastating flood event in the Odaw catchment area on June 3, 2015, led to an unfortunate loss of about 150 lives â€” may their souls rest in perfect peace â€” and about 50,000 people were directly affected to varying degrees.

The World Bank, in a report published in January 2018, estimated the economic impact of that incident at about $114 million. Across the country, there are about 30 drainage catchment areas similar in size or larger than the Odaw basin. The economic impact of widespread flooding across the country could, therefore, run into billions of dollars if we continue with the current approach to tackling the challenge.

The World Bank further estimates that $3.2 billion (4.45 per cent of GDP) worth of economic assets are at risk of flooding in the Greater Accra Region alone, and this figure is expected to quadruple by 2050 without urgent action (World Bank Press Release, May 29, 2019).

The causes of flooding in the country are multi-faceted. They include inadequate and inefficient drains, undersized culverts on our roads and uncontrolled development in flood plains, wetlands and waterways. Additionally, indiscriminate dumping of solid waste into our drains by households contribute significantly to urban flooding by blocking drains, causing storm water to overflow into homes and business premises.

Moreover, we see new developments and buildings springing up in waterways and flood plains (buffer zones), blocking the flow of storm water and worsening the risk of flooding in the country. Developments in wetlands displace large volumes of storm water meant to be stored on those lands, thereby increasing flood risk. Floodplains and wetlands operate like natural sponges; they absorb and hold back excess water. Disruptions to such areas through development causes storm water to flow at increased velocity leading to flooding and consequent devastating effects on lives and livelihoods.

On June 24 and 25, 2021, several areas in Kumasi experienced severe and devastating flooding. This affected commercial areas such as the new Kejetia, Central and Asafo markets, as well as the Bantama High Street Market. Several shops experienced flooding, and goods worth millions of Ghana cedis were destroyed. Additionally, several homes were flooded and household items destroyed. Following my visit to the affected areas, the increasing risk of flooding associated with climate change looked clear to me, and as a nation, we need to take bold steps to tackle this challenge holistically. Similar incidents occurred in the Eastern and Western regions.

The government of President Akufo-Addo is determined to tackle this challenge. Since assuming office in January 2017, the government has invested about GHÂ¢450 million in the National Flood Control and Priority Drainage Programme. This compares favourably to the GHÂ¢88 million invested by the previous government between 2011 and 2016. Clearly, this level of commitment to tackling the problem is unprecedented.

Consequently, over 19 kilometres (km) of new drains have been constructed, while some existing drains have been widened to increase capacity. Another 1,000km of drains have been repaired, desilted or maintained in addition to significant outlay in regular dredging of major waterways. These investments have resulted in a reduction of flooding incidents in the past few years.

Moreover, the government is collaborating with the World Bank to invest more than $200 million to address solid waste management and flood risk challenges in the Greater Accra Region. The project will also see the development and implementation of a Flood Early Warning System in collaboration with the Meteorological Agency and the National Disaster Management Organisation. The government will continue to invest more resources across the country to ensure that not only is the current perennial flooding challenge comprehensively addressed, but also that the country builds resilience against future flood risk.

Whereas the government is making every effort to ensure flood risk is minimised, it is important to highlight that government alone cannot do this; it must be a shared responsibility. It is, therefore, incumbent on every citizen to complement the effort of the government, take their own safety seriously and be more mindful of the manner in which they dispose of solid waste so as to maintain drainage capacity and reduce the likelihood of storm water overflow and flooding.

Additionally, individual homebuilders need to avoid the widespread use of concrete pavement blocks in their compounds and rather, make room for water by introducing vegetation to reduce the volume of stormwater runoff from their compounds into the public drains. It is imperative for local assemblies to strictly enforce planning laws and building codes to prevent development in waterways, floodplains and wetlands. Where these are flouted, the assemblies need to take decisive action to rectify the situation urgently in the interest of protecting the good people of Ghana.

Furthermore, effective flood mitigation and management need strategic planning, effective stakeholder engagement, as well as an integrated and well-planned investment approach. Accordingly, government is taking the necessary steps for the consideration of Parliament, the Bill for the establishment of the Ghana Hydrological Authority. The authority will undertake hydraulic modelling to inform housing and infrastructural development planning across the country to ensure that developments are steered away from flood-prone areas.

The authority will also develop and promote higher drainage standards, including the use of nature-based drainage solutions, and raise awareness of flood risk to enhance community safety and resilience. Moreover, the authority will ensure that flood risk assessments are undertaken for all major infrastructural developments, so they are resilient to both current and future flood risks. The proposed Hydrological Authority Bill will include a National Hydrology Fund which will facilitate the effective functioning of the Authority, including attracting private sector participation in drainage provision to reduce flood risk to the people of Ghana.

As government continues to do everything possible to protect lives, livelihoods and property, let us all as citizens be each otherâ€™s keeper and do our bit to protect ourselves and others.

The author, a development planner, is the Minister of Works and Housing and Member of Parliament for Bantama.