Opinion: Barcelona used to be a model club, now they're a perfect shambles by Pete Sharland 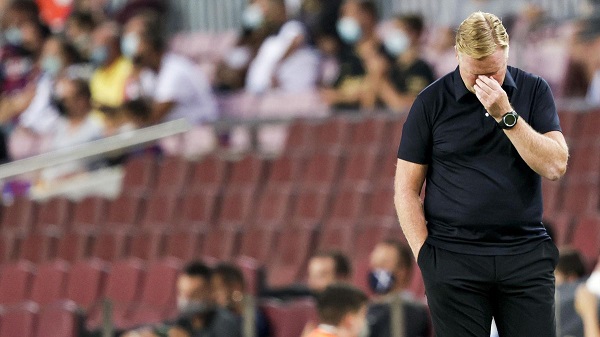 In 2006, ahead of the Champions League final, David Conn of the Guardian wrote an article about how Barcelona were a â€œmodel of integrityâ€ and an example to English clubs for the way they operated as part of the G14 elite group yet still held true to their values.

In the article, Conn wrote about the way the club had built itself into one of the true global powerhouses but remained fan-owned and kept a core system of beliefs as a key part of running the club.

The article features the following quote from then vice-president and now CEO of Manchester City Ferran Soriano:
"The fans truly own this club," Soriano says. "They control its destiny and can decide how it will be managed. This is totally different from Arsenal [two-thirds owned by ITV, businessmen Danny Fiszman and David Dein, and Lady Nina and Sir Charles Bracewell-Smith] or Chelsea, owned by one guy who could one day withdraw his investment."

Remember, this was a time where we were still a few years into Roman Abramovich's decisive move into English football, and the idea of City as a force was laughable at best.

The Glazers too were new faces at Manchester United, relatively speaking. The idea of fan-ownership at the highest level of football was a foreign, if intoxicating concept.

READ ALSO:Â Barcelona give Messi's no.10 shirt to Ansu Fati

Over the coming years our eyes and ears were inundated about how magical FC Barcelona were.

This was the club that gave us Xavi, Andres Iniesta and of course Lionel Messi. The club who didnâ€™t have a sponsor on the front of their shirt and when they did, it was a global charity, UNICEF. La Masia was the place were footballing dreams became reality and it was seen as a mecca for player development.

Under Pep Guardiola they became quite possibly the most dominant and complete team that weâ€™ve ever seen. They changed the way we thought about football (although not the first to play the way they did) and they produced one of the most compelling rivalries in modern sport with Jose Mourinhoâ€™s Real Madrid.

Off the back of their success, La Liga developed into a real challenger to the Premier League for No. 1 status.
But something has gone terribly wrong.

In case you missed it yesterday, Barcelona ended the 2021 summer transfer window with a sad whimper.

They sent Antoine Griezmann, whom they signed for â‚¬120 million, back to Atletico Madrid on loan with a mandatory purchase clause of â‚¬40 million in either 2022 or 2023. To compensate for the loss they brought in Luuk de Jong from Sevilla on loan.

TSFP was asleep by this point, but in a fitting end to a transfer window of nonsense, Barça announced Luuk de Jong at 1.24am, deleted it, and then announced it again at 3.30am https://t.co/oWqaGYMgJD

This was a summer where they lost their greatest ever player, Lionel Messi, due to a farcical financial situation and asked the four captains of the club, along with other senior players, to take big pay-cuts just to allow them to comply with La Ligaâ€™s salary cap rules.

2021 has been a year marked with off the field scandals as well. From investigations into former board members allegedly hiring a company to post derogatory social media comments about star players and club legends, to the suggestion that the club didnâ€™t do everything possible to keep Messi and the entirely amateurish way that entire affair was handled.

Across the board there are other huge mis-steps that exemplify a club who have badly lost their way. In 2013 they finally cracked and got a paid shirt sponsorship, with Qatar Airways of all organisations.

That changed to Rakuten in 2017. They, along with Real Madrid and Juventus, are one of the chief antagonists in the European Super League scandal, which their members are vehemently against.

Of that list the first three could be out of the club (or strongly phased out) in the next couple of seasons whilst Puigâ€™s future is still uncertain after a rocky few years.

Remember when they fielded an entire XI of home-grown players? Of course it was a one-off gimmick for the most part but it also spoke volumes to the amount of depth the academy can provide. One of the underrated hallmarks of the Guardiola era in Barcelona was the number of squad players who played vital utility roles.

Many notably failed to make an impact somewhere else. A skill of Guardiolaâ€™s that is right out of the Sir Alex Ferguson playbook. Maybe you can argue that Mingueza and Puig now fulfil that role but thatâ€™s it. Perhaps Nico Gonzalez or Gavi will add to that list, but itâ€™s something thatâ€™s been going on for years.

No club is ever perfect. The 2000s/early 2010s Barcelona had a number of notable whiffs (Keirrison and Douglas fans represent) and their conduct was hardly exemplary all the time. But Barcelona were supposed to be the team who rose above as much as possible.

They were supposed to stand for something different.
Now? Now they stand for nothing. There is no direction, no spine and no scruples. In the Guardian article, Sorianoâ€™s last quote to Conn was this:

"But we do compete, with pride in who we are, our history and values. Our supporters would feel alienated if we had a structure like Arsenal or Chelsea."
In the past Barcelona were the odd one out of those three clubs. Now it is Chelsea. A chaotic club in their own right but consistently successful and far better run. Barcelona arenâ€™t the Arsenal of Spain yet (hello Valencia) but theyâ€™re on the way.