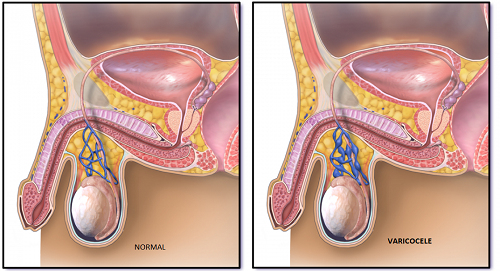 An estimated 40 percent of men being investigated for infertility have varicocele. Varicoceles are common condition that affect male fertilityâ€” this infertility condition is related to decreased sperm production, quality and quantity due to increased temperature in the testes or the scrotum.

Zadok Kwame Gyesi explores this health condition, how it is affecting male fertility in Ghana, its treatment options and how people who are affected by this condition can seek medical help. The story also touches on the stigma and challenges childless couples face in Ghanaian societies.

For the purposes of confidentiality, I will use pseudo names to refer to the couples I interviewed for this article. Similarly, I will also use pseudo names for some institutions and individuals who provided me with some information but would not want their identities to be disclosed.

Joycy, not her real name, now 38, and her husband, Akwasi, also not his real name, now 40, have a lot of stories to share with couples who are struggling to have a child they can call their own. Iâ€™m talking about infertile couples. Their battle with infertility, stigma and pressure from friends and family, nearly sucked out all the joy and happiness in their marriage.

Joycy and Akwasi's wedding was the envy of many young and prospective couples at their local branch of their church. They married in 2009. It was one of the most talked-about weddings to be held at their church, at least, within the period they did their wedding. The attendance was huge, and everything, from decoration, singing, officiating, and reception, were also on point. Many leaders of their churchâ€”pastors, prophets and apostles, all attended the wedding, including the overall leader of their church. They call their leader, Chairman. Luckily for them, the Chairman, did not only attend the wedding, he was the one that joined the two couple together and blessed their marriage.

Having the honour of the overall leader and senior clergy men of this church, which is one of the most popular churches in Ghana, attending your wedding is a rare opportunity. Those who have such honours are usually the children of the pastors, apostles or prophets within the church, and in some cases, the affluent people who support the work of the Lord with their resources or expertise.

Fortunately for Joycy and Akwasi, their parents, all members of the church, happened to be influential in the church â€“ they held positions and also supported the church with their resources. Because of this, many of the churchâ€™s leadership and all those who matter in the church, attended the wedding.

For Joycy, due to pressure and anxiety that usually come with weddings, she did not pay attention to the sermon that the leader of the church delivered on their â€˜big dayâ€™. But she could remember portions of the prayer that their leader prayed for them after blessing the marriageâ€”"May you be blessed with the fruit of the womb.â€

Joycy said, she said a big amen to the man of Godâ€™s prayer, with a high hope that the prayer will be fulfilled in the shortest possible time in her life. But her expectations hit the rocks when days turned into months and months into years, and still, pregnancy did not come.

"I was so scared; I didnâ€™t believe I was going to be part of people who will struggle to give birth,â€ she voiced out her ordeal.

For Joycy, the â€œMay you be blessed with the fruit of the wombâ€ prayer lingered all the time in her ears, saying â€œAnything about our wedding that I saw reminded me of the prayer.â€

As normal practice in many Ghanaian churches, whenever the church holds any major programme such as prayer meetings, crusades or conventions, they usually holds an intersessional prayers for people who need Godâ€™s favour, and during times like this, couples struggling to have children, are normally called in front of the congregation to be prayed for. Joycy said they were prayed for all the time.

â€œAnytime my church held any programme, I felt so scared to attend because I knew they will call to pray for us; and whenever such thing happened and I got home, I sobbed,â€ she noted.

For her, anytime there was a childâ€™s naming ceremony at her church, she felt the weight of her childlessness.

â€œWhen we come to church and people are dropping their children at the Sunday school, I felt so sorry for myself. I was crying within me all the time,â€ she disclosed.

As she continued to be â€œembarrassed with naming ceremoniesâ€ in the church, as she would put it, and many â€˜insensitive commentsâ€™ people passed about her, she decided with her husband to leave their local assembly to another branch of the church. At least, they will be new there. But unfortunately for them, due to their parentsâ€™ influence in the church, when they got to the new church, they were highly introduced. For her, she felt relieved at the new branch since the people there didnâ€™t know how long they had married.

â€œSix years without a child is no joke. I had so many things running through my mind,â€ Joycy recounted, adding â€œI visited many hospitals but I was not getting result.â€

Joycy said their breakthrough came five months after they joined their new church. According to her, the church held a health talk programme in which they invited many health experts, including fertility specialists. She said she attended the programme with her husband after the programme, she went to speak with the fertility specialists, who also happened to be a member of the church but in a different branch.

â€œThe doctor asked me to call my husband too so that he can speak with us both, which I did. He spoke with us for about 10 minutes and asked that we see him for some tests at his workplace,â€ she recollected, adding â€œWe went to see him as he requested and when he conducted the test, it came out that my husband had a condition called varicocele.â€

Joycy, now a mother two, said they started having their babies when her husband was treated of her varicocele condition.

Varicocele is the enlargement or extension of the veins that surround the spermatic cordsâ€”the cords the testes hangs on. It is a medical disorder that results in infertility in men.

A study published by Kenneth Kee in December 12, 2016, titled: â€œVaricocele, (Scrotal Varicose Vein) A Simple Guide To The Condition, Diagnosis, Treatment And Related Conditionsâ€ estimates that varicocele occurs in about 15-20% of all males and in 40% of infertile males.

Health experts say that varicoceles differ in sizes and can be categorised into 3 groups, namely large, moderate and small.

According to some health journals, varicoceles generally form during puberty and are more commonly found on the left side of the scrotum. Although it can occur at both sides of the testes, its rarely happens due to the differences in the anatomy of the right and left sides of the scrotum.

A urologist and kidney transplant surgeon, Dr Isaac O. Asiedu of the Korle-Bu Teaching Hospital, explains why varicocele is linked to male infertility, its symptoms, correctional methods and what helps are available for those with the condition.

He said although the condition is common, it is not commonly seen in boys who are yet to attain puberty, but the condition is present in about 15 per cent of the general population of men. He, however, pointed out that varicocele is seen in up to 40 per cent of men who are undergoing investigations or treatment for infertility.

Even though Dr Asiedu said varicoceles are not common in boys yet to attain puberty, he was quick to add that there have been sporadic occurrence of varicocele in younger boys.

On what causes varicocele, he said, there is no one exact cause of the condition and that there are several factors responsible for its cause.

â€œWe donâ€™t have an exact cause of varicocele but we have factors that predisposes to the development of varicocele,â€ he observed.

The hydrostatic pressure, he said, pulls more blood into the left spermatic vein and then also into the left Pampiniform plexus (it is a network of many small veins found in the male spermatic cord; they also play a role in the temperature regulation of the testes) of veins within the scrotum.

â€œSo the increase hydrostatic pressure on the left side of the scrotum can affect sperm production and quality,â€ he said.

He further explained that defective valves in the veins of the spermatic cord could also cause varicocele. He said every vein has valves in it and that the valves make sure that there is only one directional flow of blood. But in the case of varicocele, he noted, the valves become defective such that they donâ€™t work effectively as they are supposed to function, hence blood pulling back instead of going in one direction.

â€œWhen you have a lot of pressure with the blood pulling back, it distends the veins around the testes in the scrotum,â€ he explained.

Dr Asiedu added that the development of varicocele could also be a sign of a tumor growing in the abdomen, hence compressing the internal spermatic vein which brings pressure into the scrotum.

How does varicocele cause infertility?

He said when a tissue doesnâ€™t receive enough oxygenated blood, it starts shrinking or dying and that can reduce the testicular volume, hence affecting sperm production and quality.

Dr Asiedu, who is a fertility specialist said varicoceles are usually asymptomatic, meaning, they may not show any sign or symptom at all. However, he added, â€œthere are things you could see to suspect that you probably have the condition.â€

He explained that there are times that scrotal swelling is very severe and when one holds the scrotum, it feels like a bag of worms.

The definitive diagnosis is reached when your doctor examines your scrotum and also performs an ultrasound scan of the scrotum.

Touching on the treatment for varicocele, Dr Asiedu said, there are several ways varicoceles can be corrected. He, however noted, correction of varicocele is usually surgical.

â€œWe can have open varicocelectomy â€“ what it means is that we go in into the groin, identify the vein that has been enlarged and then we blocked them,â€ he explained.

He added that surgeons can also block all the enlarged veins; such that there will be no pulling of blood into them to cause hydrostatic pressure that could increase the scrotal temperature.

Explaining further on correctional methods, Dr Asiedu said, it can be corrected using technologyâ€”saying â€œso we have interventional radiologists where they just puncture a little hole in the thigh and then thread an electric coil into the blood vessel that are enlarged and then blocked them.â€

He noted that varicoceles can also be corrected laparoscopically, where cameras and the surgical instruments are introduced through pinholes in the abdomen to look for the distended vessels in the abdomen for them to be blocked.

The good news, Dr Asiedu said, is that all the treatment options for varicoceles are available in Ghana.

Infertility though a problem that affect both males and females, it has become a common thing to always blame women for it. It is not surprising that many authors have written books to help address this issue, affecting many people around the world, particularly in Sub-Saharan Africa.

Books such as â€œThe Joys of Motherhoodâ€ by Buchi Emecheta; â€œThe Sex Lives of African Girlsâ€ by Taiye Selasi and â€œAnowaâ€ by Ama Atta Aidoo all sought to address the menace of infertility and its associated stigma. This is because in Sub-Saharan Africa, marriage, must at all cost, result in a childbirth. But must couples be stigmatised for their inability to give birth? The answer obviously is no. We can change the narrative on infertility stigmatisation with our collective actions. Women are more than mothers and men are more than fathers.