'Roman Abramovich - a ruthless operator who rewrote the rules' 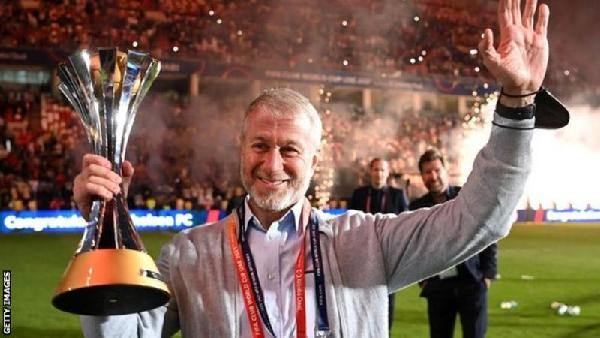 When Roman Abramovich bought Chelsea in July 2003, the official statement announcing his arrival described the Russian as "a keen follower of sport and international football".

Abramovich's decision to narrow that interest down to solely Chelsea transformed the domestic and European game as his vast finance fuelled a 19-year era of success in which they were England's most successful club.

One of the most important goals in Chelsea's history was scored by Jesper Gronkjaer to give them a 2-1 win against Liverpool on 11 May 2003, the final day of the Premier League season.

It put Chelsea into the Champions League at Liverpool's expense, made the club a vastly more attractive proposition to potential buyers and led to Abramovich's £140m purchase from Ken Bates, giving them the base to attract the players that fitted the new owner's grand plan.

Since then it has been an almost unbroken tale of success in which Abramovich, even watching from afar, provided the one constant.

Managers have come and gone with ruthless regularity. Big-name players were replaced by even bigger-name players - but what remained ever present was Abramovich, his ambition and, most significantly, his money.

Now that is all about to change. You could even feel the uncertainty in the air in the unlikely surroundings of Luton Town's Kenilworth Road on Wednesday when the news Abramovich would sell the club was announced 62 minutes before kick-off in Chelsea's FA Cup fifth-round tie.

Abramovich led the way for the big-money "sugar daddy" foreign owners but will also be one of the most divisive, controversial figures to populate the game. The football legacy, however, will be one of success.

The 'special one' transformation 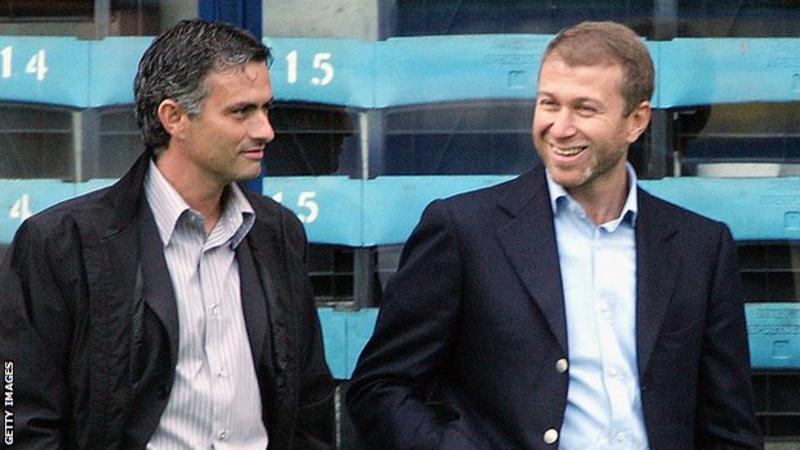 Abramovich noted that the established order when he arrived at Chelsea centred on Arsenal, Manchester United and, at that stage to a lesser degree, Liverpool. He did not want to join them, he wanted to overtake them.

The plan was to disrupt that normality. Abramovich achieved his aim spectacularly and quickly.

The popular Claudio Ranieri was backed heavily and finished second in the Premier League, also reaching the Champions League semi-final in Abramovich's first season. It was not good enough for the owner, who sacked him.

It was a clear signal of what the Russian wanted. Namely everything.

Jose Mourinho, who had just won Abramovich's cherished Champions League with Porto, breezed into Stamford Bridge and famously announced himself as "the special one", fulfilling his new boss' desire by winning the club's first title in 50 years.

The pair, one with the money and the other with a silver touch as well as bags of charisma, successfully challenged the previous dominant forces and Chelsea were on their way.

Abramovich had a thirst for success and Mourinho was the catalyst to satisfy it.

Rewriting the rules of success

For years, the old mantra was that stability brought success. Patience was a virtue that would be rewarded. Manchester United had their own laird in Sir Alex Ferguson, while Arsene Wenger ruled everything at Arsenal.

Short-termism won nothing, so the rules seemed to suggest.

Abramovich turned this logic on its head. It was not quite a chaos theory but stability has been a stranger to Stamford Bridge during his tenure - and has brought 19 major titles, putting Chelsea at the top of the game, clinching the Club World Cup just weeks before he announced his planned departure.

He appointed 10 full-time managers in his 19 years. Mourinho was hired twice, while Guus Hiddink had two spells in interim charge and Rafael Benitez was appointed on the same basis.

Even left-field choices such as Avram Grant ended with an appearance in a Champions League final in 2008, when Chelsea lost on penalties to Manchester United. Grant was a very average manager and the beneficiary of a high-quality squad that ran itself powerfully - many felt too powerfully - when it came to the firing of managers.

It was almost symbolic of how Abramovich's unique style worked that Roberto di Matteo, appointed as interim manager following the sacking of Andre Villas-Boas, was in charge when Chelsea won the trophy the owner regarded as his holy grail, the Champions League, in 2012, against Bayern Munich in their own Allianz Arena. The Italian also won the FA Cup.

The trademark ruthlessness followed as, after being rewarded with the permanent job, Di Matteo was sacked just six months after Chelsea's greatest night.

Benitez was a toxically unpopular appointment because of his Liverpool lineage but also proved Abramovich was a pragmatist willing to ignore the feelings of Chelsea fans when required. The result? Benitez won the Europa League in 2013 in his interim tenure.

Abramovich was not the sentimental type either, sacking the beloved Carlo Ancelotti a season after winning a historic league and FA Cup Double. Chelsea's leading goalscorer and club legend Frank Lampard was out in January 2021, a little more than a month after a 17-game unbeaten run had taken them top of the table, a decision followed by the appointment of Thomas Tuchel and a second Champions League triumph.

History suggested it was an approach that would not work and yet Abramovich's has, time after time.

The glory pact with Chelsea's fans

Moments after Abramovich released his 278-word statement announcing his decision to sell up, Chelsea's fans filing into the Oak Road stand at Kenilworth Road broke out into song, chanting his name.

It was a signal that, despite the recent events in Ukraine, Abramovich's alleged strong ties to Russian President Vladimir Putin, which he denies, and demands for sanctions against him, he still retains affection among many Chelsea fans for the glory he has brought them.

Abramovich had the strangest of trade-offs with Chelsea's supporters, who accepted managers they loved and admired could be sacked on a whim. In exchange they basked in continued success, no matter how many times the occupant of the managerial office at Cobham changed.

Even when Chelsea fans disagreed with Abramovich's decisions, he was rarely blamed or criticised, such was the tacit pact between owner and support, a deal rubber-stamped by success.

When Mourinho was sacked for a second time in December 2015, it was Chelsea's players who took the brunt of criticism. In the next home game against Sunderland, watched by Abramovich, there was loud support for Mourinho and banners bearing the messages: "Three rats. Hazard, Cesc and Costa" and others reading "The Players v Jose, one of os" and "Our Jose".

Not a word of any note against the owner who had sacked Mourinho. It just was not done.

Chelsea's fans silenced any criticism because they knew the good times they enjoyed were financed by Abramovich.

What would it be like if he left? Chelsea and their fans will soon find out.

What will be Abramovich's Chelsea legacy?

Former Chelsea captain John Terry made his feelings about Roman Abramovich clear after he announced his intention to sell by posting a photograph on social media of him standing next to the Russian, the pair holding the Premier League trophy, accompanied by the words: "The Best".

It is an opinion that will not be shared by many outside Stamford Bridge but in the football context alone, Abramovich achieved what he set out to do at Chelsea.

Abramovich wanted to end the dominance of Arsenal and Manchester United and then put Chelsea in a position to compete with any future rivals, such as the rejuvenated Liverpool and Manchester City, another club suddenly fuelled by vast wealth following the takeover by their Abu Dhabi-based owners in 2008.

He immediately set his sights on the Champions League as confirmation that Chelsea were now at European football's top table. It took him nine years but it was achieved, then repeated against Manchester City in Porto in May 2021.

One of the rare public sightings came when he was pictured with the Club World Cup after Chelsea beat Palmeiras in Abu Dhabi in February, in all likelihood the last time he will ever strike such a pose.

As for Chelsea, it is unlikely they will have another owner in the mould of Abramovich, a figure in the background publicly, almost never giving interviews, shying away from the limelight and yet at the same time indispensable to everything important at Stamford Bridge.

Abramovich may not have been in public view but it was his club, his decisions, power pretty much unquestioned.

The list of trophies and the manner in which Chelsea came from occasional success to permanent force both domestically and on the European stage is down to Abramovich's backing.

For all the controversies, contention and divergence of opinion about Abramovich's influence at Stamford Bridge and beyond, Chelsea now face a time of uncertainty and potential upheaval as he prepares - at some point at least - to take his leave.