'The funeral experience as tourism' by Elizabeth Ohene 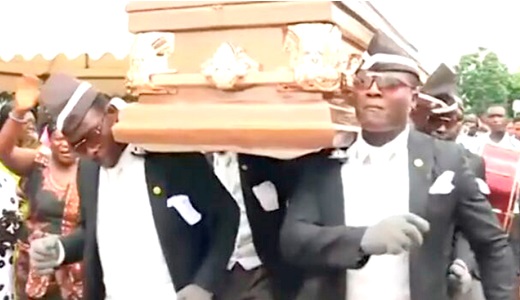 I do not pretend to understand what a meme is and as for something called nft, non-fungible-token, I confess freely that whatever it is, I raise up my hand to indicate it is way beyond me.

But there is one bit of the news that broke last Monday, which, in spite of the liberal use of meme and nft, I am able to understand and work out that it must be good news.

The headline says Ghana’s Dancing Pallbearers sell meme NFT for $1 million. Whatever it is they have sold, one million US dollars is a lot of money in anybody’s pocket.

A number of people have sent me the story and want me to concede that something good has come out of our preoccupation with funerals.

They want me to see the elaborate funerals as something positive.

From what I understand, the story says the Ghanaian dancing pallbearers who hit international fame back in 2020 when they were featured in a BBC programme and the video went viral have sold something for $1 million.

They are reported to have offered a quarter of the sum, $250,000 that is, to war victims in Ukraine. I am not going to get into memes and non-fungible tokens. I understand that it has something to do with the video, the dancing with the coffin, probably the way they were dressed, the music, the choreograph movement.

What I am not sure of is whether by selling whatever it is they have sold, it means if I hire them to a funeral, they will not be able to perform a similar show and whether it means the show has been copyrighted and nobody else, another set of pallbearers for example, can do a similar dance.

Obviously these are easily explained matters which baffle me only because I am not literate enough in social media language.

I have no doubt nobody else is struggling to understand the story. So I will stick to the bit of the story I do understand.

I am always complaining about our funerals and the amount of time, energy and money we spend on them.

If a few seconds of a video taken at a funeral can be sold for a million dollars, maybe I should stop complaining and rather encourage the innovations that I see in funerals regularly and instead of getting angry or exasperated, I should welcome them.

I recently saw a video of a rotating grave.

So, which bits of our funerals would interest the rest of the world enough for someone to pay to watch?

Obviously, it would be the bits that nobody else does. We would deliberately redefine funerals and put them under tourism and we all agree that every time we organise a funeral, it is meant to be a show that people will be ready to pay to come and watch.

The Funeral Experience, it will be called.

Let’s start from the beginning then. The meetings, the funeral meeting, the endless meetings that start once someone dies.

I wonder if we can generate a meme out of those. Akwasi Agyeman, the Ghana Tourism Authority Boss, and his creative people will doubtless come up with something.

I suspect we can attract a sizeable audience every time a family is defined at the first meeting to exclude spouse and children once someone dies.

It might hit the type of nerve that a dancing pallbearer does, weird enough to be funny.

A dead body belongs to the family and this family does not include a spouse and children.

The specially chosen cloth that all family and close friends would wear and if the cloth should be designed to have the photo of the dead person boldly printed in it, we might trigger a meme nft out of it.

Ghana is already famous for its special customised coffins. The coffin makers of Teshie have been featured in numerous magazines around the world over the years and we only need to find a little something extra to convince the rest of the world that mothers need to be buried in coffins designed as mother hens.

I am quite sure that nobody else draws up obituary notices the way we do, complete with the strict protocol on which name precedes which one and who announces the death and what qualifies you to be a chief mourner.

The funeral brochures certainly have something that we can sell to the rest of the world; many of them are works of art that would win design prizes.

We will have to find some way to stop the practice creeping in of people taking things from the Internet as tributes to their loved ones. It is quite disconcerting to discover that a grandmother at Abutia is being mourned with exactly the same deeply felt tribute paid to another grandmother three weeks earlier at Bekwai.

If we want funerals as tourism showpieces, we will have to make concessions on some of the current practices; four-hour church services just won’t do. We will have to find a way to convince the priests that the presence of visitors in the church does not mean the sermon has to be long and it certainly shouldn’t mean that there would be two or three offerings and a special fundraising for the new church building.

I notice that the undertakers are also bringing innovations in how they present the dead bodies for the file past. I have seen a dead teacher sat at a table, pen in hand with an exercise book opened on the table obviously marking the Mathematics test conducted the day before.

I went to a funeral recently where the clothes were changed on the corpse three times during the lying in state, a totally new definition to a shroud.

Doubtless, all these would be good selling points for the tourists we would want to attract to our funerals.

I have already christened Ghana the funeral capital of the world; I don’t think we have any competitors for the title.

Nobody comes anywhere near us when it comes to the crying and wailing at funerals, be it choreographed or spontaneous, it is always a great part of the show.

Even the donation table and the announcements provide great entertainment.

The wonder and novelty is better and less stressful than going to the Wli Waterfall.

It is ready-made, it is not seasonal and there is no problem about fixing the road to the site.