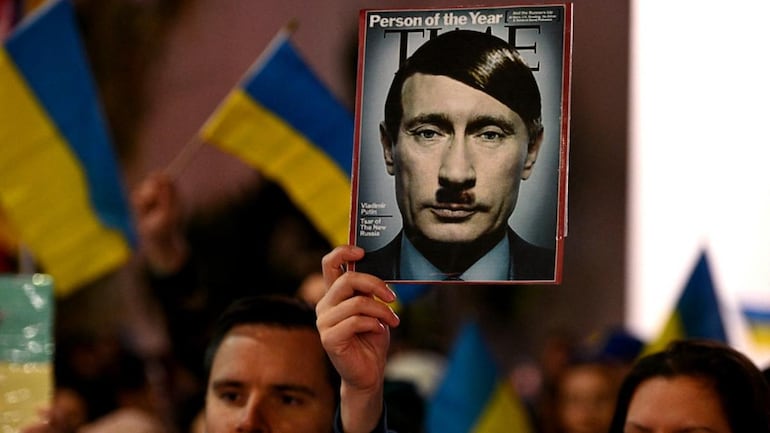 Author Dr Robert Lyman says 2022 is the most dangerous year in Europe since the end of the Second World War. He says parallels between Vladimir Putin and Adolf Hitler are uncanny

The parallels between today and September 1939, when Hitler’s German legions smashed into Poland to ignite Europe in the Second World War, are uncanny.

It certainly makes 2022 the most dangerous year in Europe since the end of that terrible, bloody war in 1945.

What the West does now will have dramatic consequences for the future of the world as we know it. If the world allows Putin to get away with his latest land-grab (he has form in this area, seizing the Crimea from Ukraine and helping so-called ‘separatists’ take over the Donbas region in 2014) there’s a very good chance he’ll take this as carte blanche to do it again, elsewhere.

The targets? The Baltic States (Latvia, Lithuania and Estonia) will be first on his hit list, even though they are members of NATO. As I explained in my book The Rise of the Third Reich, this is what Hitler did after 1938; take little nibbles at bits of Europe that weren’t his and if people didn’t make too much of a fuss, keep on nibbling. 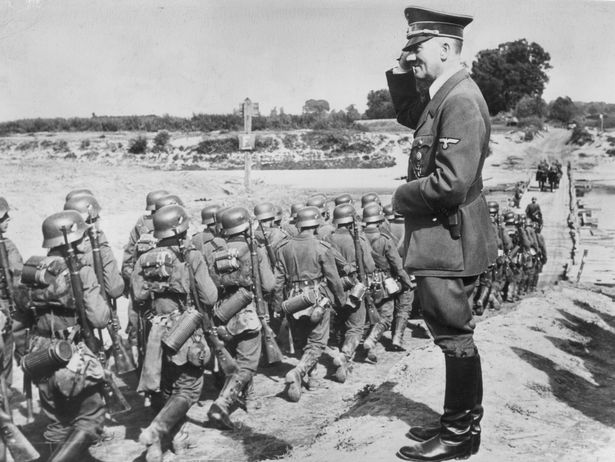 The invasion of Poland in 1939 took place because Hitler believed he would get away with it, and that the West wouldn’t or couldn’t retaliate.

So what do we do? We need to put Putin back in his box without initiating the Third World War.

This will be hard, as it’s what he has calculated, with his threats today. He believes the world will be too scared to do anything, as he’s got his fingers on Russia ’s nuclear triggers.

So we have to look at other ways to demonstrate to Russia that attacking and invading another sovereign country without due course is illegal, morally wrong and will end up failing.

Whatever else happens from this, the wages of aggression must be seen by Putin to be miserable and not worth the effort.

First, like Hitler, Putin has a distorted view of history, one seen through the lens of ethno-nationalism. He believes that everyone of Russian origin shares the same blood, language and culture, and therefore must be united within the same borders.

Hitler called his concept of a racially pure Germany, all within the same border ‘Grosse Deutschland’.

Putin has a quasi-religious view of the origins of the ‘Rus’ people and Ukraine sits at the heart of this twisted vision of a racially-united Russian people. Hitler took his racial nationalism to a further degree, taking his fight to the Untermensch by murdering millions. 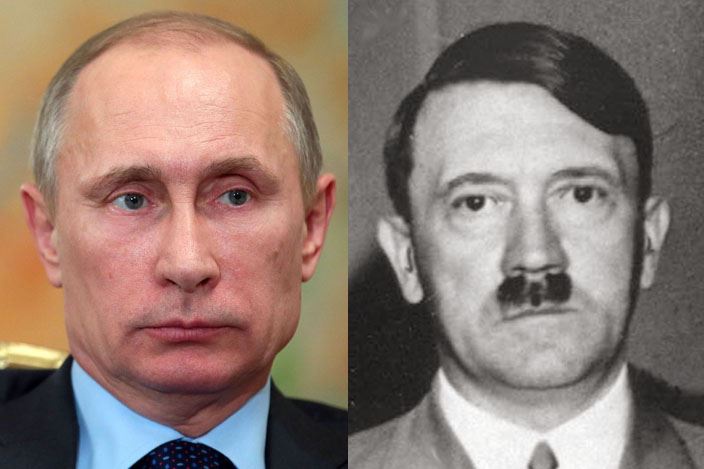 At least Putin doesn’t seem to want to exterminate his racial enemies, but that’s a very small plus point. Uniting people because of ‘blood’ is the sort of bizarre feature of ‘olden times’ that we historians expect to study from the past, not to watch on our TV screens in a supposedly more enlightened, age.

Second, like Hitler, Putin has blamed his war on us. In his twisted logic, the West in general (because of our fixation with individual freedom and democracy) and NATO in particular, has been responsible for turning Ukraine slowly but steadily since 2014 from its birth right into another Western puppet.

As Hitler blamed both the Jews and the Versailles settlement in 1919 for Germany’s misfortunes (the ‘stab in the back’ idea), so too Putin blames the West for the fact that on the whole Ukraine wants to look West, rather than East. Like the jilted lover in Fatal Attraction, an out-of-control Putin is now determined to boil Ukraine’s bunny.

Third, it’s clear that, like Hitler, Putin has been planning this for a long time, certainly since 2014. His invasions of Georgia and Crimea clearly demonstrate his intent. Like Hitler, his real problem has been trying to persuade the world that his intentions have always been benign.

It’s no surprise to me that the invasion has come just after the closing ceremony for the Winter Olympics. He has been meeting Western leaders almost on a daily basis for weeks now, all of them believing that they could, like Neville Chamberlain at Munich in 1938, deter Russia from war by means of their personal advocacy.

That ridiculously long table at which Putin met President Macron last week would have been comical were it not the perfect symbolism for the scale of the divide between the liberal West and Putin’s Russia. Indeed, outrageously, Putin even met with the President of Pakistan (shame on Imran Khan) on the very day of the invasion.

Fourth, like Hitler in the 1930s, Putin has been building up his armed forces substantially over the past decade. While we in the West have been shamedly scaling down our forces, Russia’s have been growing steadily in size, quality and technical sophistication.

Fifth, the mental divide between how we see the world and how Putin sees it has been steadily growing. Chamberlain’s mistake, which he realised too late, was that Hitler simply did not see the world as we did. Today in the West, just like the 1930s, we just don’t see the world as Putin does.

He is a gangster who has secured power in Russia; what he wants now is to ensure that those states that border Russia are at least acquiescent, if not in his pocket. Just as Hitler hated the idea of a free Czechoslovakia and Poland (he despised democracy) so too does Putin hate the idea of a free, successful and democratic Ukraine.

This, in a nutshell, is why Russia has invaded. In Russia the ability of ordinary Russians to make their voices heard has been massively curtailed in recent years, just as it was in Hitler’s Germany.

This slide into totalitarianism should have been a wake up call for us years ago but, just like the frog slowly boiling in the pan, we’ve grown to accept Russian political illiberalism as just another strange feature of a country than has never seemed to want to join the supposed nirvana that is the liberal West. Now that the dissenters have been all locked up, the anti-Putin voice in Russia has all but disappeared.

Whether Putin’s invasion of Ukraine is successful, in either the short or long term, remains to be seen. It took the world six years and millions of lives to defeat Hitler. Putin will be gambling that the world doesn’t have the stomach for a fight. He’s probably right.