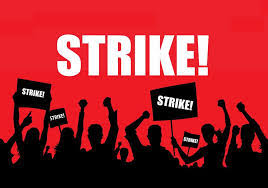 Section 174 of the Labour Act 2003, (Act 651) defines strike as “any action by two or more workers in concert which is intended by them to restrict in anyway the service they normally provide to the employer or diminish the output of such service with a view to applying coercive pressure upon the employer and includes sympathy strike and those activities commonly called work-to-work, a go slow or sit down strike”.

Thus, an action undertaken by workers which slows down their normal work is considered a strike action. Therefore, strike does not only mean total withdrawal of services.

Strike is a tool applied by workers to press home their demands from their employers. However, the law requires that before applying strike as a tool, workers should ensure that all the necessary processes prescribed under the law are followed before embarking on strike.

READ ALSO: In Ghana we use illegal strikes to get the right things done - Dr. Asah-Asante

Available statistics at the commission show that from the year 2010 till date, a number of strikes were recorded mainly by workers in the public service and though these workers may have legitimate concerns, they failed to adhere to the laid down procedures under the law to embark on these industrial actions, thus making their actions “illegal” under the law.

For strike to be legal, the Law under Section 159 stipulates two circumstances under which legal strike can occur.

It is under such a circumstance that a party intending to strike or institute lockout must give a written notice to the other party and the National Labour Commission. However, what has become the norm by some workers, workers organisations and associations is for them to issue press releases or press statements of their intention to embark on strike. In other instances, the NLC is only copied notice of strike. Such acts contravene the provisions for embarking on strike under the law.

Again, such act prevents the commission to pro-actively intervene to have the issue resolved. Very often also, the strike action started before the commission was informed. Furthermore, the practice where workers write to state that if no action is taken within a specific period “we would advise ourselves” is not appropriate because advising “oneself is not a notice “to the commission. Where a party is aggrieved and intends to take action, that party should state clearly the reasons for dissatisfaction and officially report to the commission for redress.

READ ALSO: Your strike is illegal and you must call it off immediately - NLC orders teachers

A notice of strike, therefore, must be properly served as required by the law. It is important to note that today’s practice of the industrial relations must be based on transparency, good faith and adherence to the Labour Act 2003, (Act 651).

As social partners and industrial relations practitioners, let us commit ourselves to sub-part II of Act 651 which clearly spells out the requirements for effective dispute resolution.