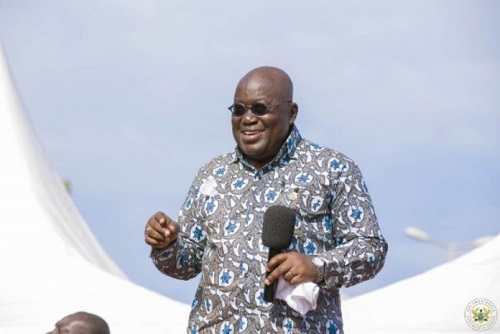 News bulletins on radio these past few months have become a litany of woes filled with cacophonous voices of protest.

Measuring the level of passion, I wish I can pretend that all of them are voices of the Opposition. But I know they are not.

In the Atta Mills and Mahama eras, I could almost swear that the Ghana Centre for Democratic Development (CDD), Ghana National Association of Teachers (GNAT), University Teachers Association of Ghana ( UTAG) , Ghana Union of Traders Associations (GUTA) etc. had all been infiltrated or were being fingered by the New Patriotic Party (NPP). Today, these same voices are sonorous in their protests and ultimatums to an NPP government.

That tells me something, and I write this piece this day as a reminder to President Nana Addo Dankwa Akufo-Addo that a sizeable portion of the over 1,000,000 Ghanaians who voted him to power were non-partisan voters, most of whom are in the CDD, GNAT, UTAG, GUTA and universities. These people vote purely on issues, and key on their list of issues is corruption.

And why not? Corruption stinks. On October 3, 2018, the Deputy Commisioner of Human Rights and Administrative Justice (CHRAJ) , Mr Richard Quayson, announced that Ghana loses GH¢13.5 billion every year through corruption.

If you are NPP, do you not often find yourself tending to believe that when it comes to corruption, the culprits are enjoying too much impunity?

Can every NPP sympathiser strike his/her chest and swear that in the 2018 “Cash for seat” scandal and the revelations gathered by the bi-partisan parliamentary fact-finding committee, it was not true that the Ministry of Trade and Industry did not collude with the Millennium Excellence Foundation to charge between $25,000 and $100,000 to enable expatriates to sit close to the President?

As a Ghanaian whose monthly salary does not take you home, do you not - even if you are NPP – feel the urge to advise the President to cut down on the number of his appointees, especially when it has become very evident that 110 ministers are not the solution?

Even as a member of NPP, were you not scandalised by the thought that the Director-General of the Ghana Maritime Authority renovated a two-bedroom house at a cost of $1 million? Eiii!

Eleven air-conditioners in one house belonging to one man may make sense to the person in government who is used to luxury, but the average voter does not know even comfort.

The words of praise for the President had barely escaped our lips for relieving the DG of his post when, bam! came the announcement that the man was now board chair of Ghana Revenue Authrority (GRA). The President did well withdrawing the appointment, but right-thinking persons in society question how the very thought of such an appointment dropped into his head in the first place.

There are many, especially in the Judiciary, who will never forget that eight members of the NPP's Delta Force released from lawful custody their members who were standing trial. I, who write this piece, am one of those who disagree with the Attorney General’s conclusion that there was insufficient evidence against the accused persons.

Honestly, listening to the voices on radio, contemplating the near tragic errors of judgment and feeling of impunity by some of NPP’s functionaries and government appointees, I wonder if Nana Addo has his eyes on 2020.

To the President, I recommend the words of the late Ghanaian diplomat and poet, Paa Kayper, who counselled thus: “Walk. You don’t run to the funeral of one who died running.”

It is not the number of projects . Consider Mahama. He took fat loans to undertake many infrastructural projects; indeed, even today, as he seeks a comeback, “massive infrastructural development” remains his mantra. It is not that Ghanaians did not see or feel those projects; it is that Ghanaians hate people who take them for granted. If you ask me, I think many in Nana Addo’s government are taking Ghanaians for granted.

One of the direct consequences of Nana Addo’s slips and impunity by his appointees is that John Mahama suddenly begins to look like an angel.

There are many things the people of Ghana remember, and with pain. One of them is the bus rebranding saga.

Read this, dear reader: “On July 28, 2015, some two months AFTER Smarttys had completed the branding of the buses, the chief director of the Ministry of Transport, signing on behalf of the minister, then wrote to the Public Procurement Agency (PPA) for approval to sole-source the branding contract to Smarttys,” – under Mahama’s government.

Was the allegation true or not that about 58 per cent of Ghana’s bauxite reserves were sold to Ibrahim Mahama, brother of former President John Mahama? According to the news story, the then NDC government, acting through the Minister of Lands and Natural Resources, on December 29, 2016 entered into an agreement and granted Exton Cubic Group Limited mining leases to mine bauxite in different concessions. This was a few days after Mahama had lost at the polls and a few days before he was to hand over.