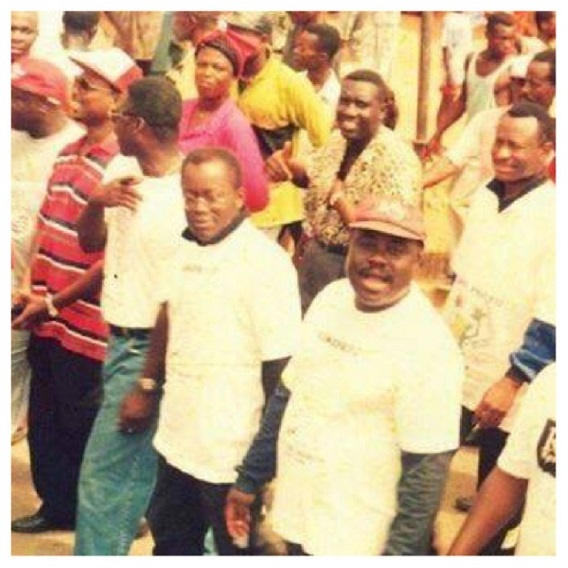 It is not I who must write this history. I was in my early 20s when the antecedents of this movement started.

There are many who are much, much more qualified than I to do so.

Recently when I was told Kabral Blay Amihere had written a book about Independence history, I nurtured unreasonable private disappointment.

I thought to myself: few people are more qualified to write the history of the Fourth Republic than Kabral.

So why is he quiet about that and writing about Independence? But who am I to tell as distinguished a person as Kabral, what to write?

If Kweku Baako Jnr does not publish his books this year, I will pitch tent outside his home until they are released. 🤣

Akufo-Addo, Akoto Ampaw, Nyaho Tamakloe, Tarzan Wereko-Brobbey, and all the others must document their views on these historical processes.

But so too must others like Kwame Karikari, Akwasi Adu-Amankwah, Yao Graham.

Anytime I touch on such subjects, I notice a serious famine for news among today's young people.

I take a clinical approach to history. I follow the path of integrity as far as it will go. So I stick to facts about people in specific time contexts.

Which is why I am able to stay away from mixing today's views and judgement of people from their deeds in the past.

No matter what became of Diego Armando Maradona, I will never quarrel with his innate footballing capabilities.

He was an outstanding footballer. Agree to that then you say whatever else you want to add that is factual.

I was savagely attacked by an ignoramus for saying I worked with Akufo-Addo at Alliance For Change.

On reflection, I realised that many think the Alliance For Change was just its national leadership.

Nothing can be more wrong. It was an intergenerational grouping.

Young guys like us, Akwasi Zurich Agyemang, George Sarpong, the Katanga banker whose cover I will not blow because of his present employment status and many others were readily welcomed to mingle with and debate the leaders mainly at Wereko Brobbey's home.

As I said to the ignoramus, the Alliance For Change leaders are still alive. Check with them.

Do not just stay in a cave of ignorance and accuse us of making up credentials.

Straight out of university, I had met and befriended Kwesi Pratt jnr. Kwesi regularly broke protocol - those who know him well, will not be surprised - and took me straight into big discussions of the AFC leaders (sometimes).

I particularly remember one such in Akufo-Addo's Nima home. Over lunch the AFC convinced Akufo-Addo not to participate in the 1996 Presidential contest.

And he accepted. Even young me then was given a say and Nana Akufo-Addo listened.

So I got to know them well and being an outspoken young man then, now get quite amused about how strong my views were at the time.

We wanted democracy and the opposition had to unite.

No matter what became of these men later, I will never deny them their places in history.

They played major, courageous and determined roles in confronting dictatorship in Ghana. This is incontrovertible and irrefutable.

Today, of them all, I am probably as a matter of intellectual kinship, closest to Kweku Baako. Largely because of our common love for conversation on Facebook.

But Kweku Baako used to call me "Pratt's Boy." Then he would smile and say he would not reveal my other name which he has kept as an industrial secret till now. 🤣

That sounds strange to some people now. But such is life.

Whatever we think about these men today, first acknowledge the facts of history. People say to me today that Nana Akufo-Addo has never won an important legal battle in court. This is utter ignorance.

Whatever has become of Akufo-Addo as President, I grant him his due as a lawyer then. To the prodemocracy forces of this country at the time, he was a magical and daring lawyer.

Without Tarzan, Victor Newman, Kweku Poku and others of Radio Eye (all later leaders of the Alliance For Change), the history of private broadcasting would have been different in Ghana.

Supporting them with intellectual rigour were people like Kofi Kumado and Kwame Karikari.

In the campaign against criminal libel, it is now even forgotten by some that Professor Kotey and Margaret Mensah-Bonsu played courageous roles in giving probono education to journalists.

Akoto Ampaw always cut the figure of the highly cerebral and hardworking lawyer. He was courageous and indefatigable.

Back in the day Haruna Atta and Akufo-Addo were inseparable. Haruna very clearly an ardent admirer.

Who did not wait for PAVA's articles back then. Fearless of the Gestapo, he thundered with the authority of an Old Testament prophet. Considerably and singlehandedly expanding the vocabulary of literate Ghanaians.

I stand to be corrected here because this is the version, Kwesi Pratt told me. But it was actually Wereko Brobbey who compiled the original list and convened the AFC leaders. I have not included comments about Kakraba Cromwell and Adjiri Blankson yet.

This could go on and on but I choose not to. I will just say at midnight the day before Kume Preko, I was with Kwesi Pratt jnr at his Kotobabi Down compound house.

A very tense moment. Credible intelligence sources had indicated that the Gestapo was mobilising against the demonstrators. When the leaders of the AFC showed up to lead the march, they knew quite well they may not make it back alive. But they showed up and they led, from the front! I will forever salute them for this.

Ahunu Hongar and 4 others died though, and no one was ever prosecuted. There is no other way to put this than to say this is unacceptable.

I am of course much less naive. I know the real life trade offs that have been made. Nana Akufo-Addo said at the time that the trail of blood ended at sensitive doorsteps. I suppose principalities and powers do not allow their consciences to be disturbed easily.

I remain of the view, even if this means I now tread on delicate grounds, that we all betrayed Ahunu Hongar and others. By not getting justice for their families.

These guys invested lots of time to think and plan back in the day. They were very diligent in execution. That is the activism I know.

I still remember Kweku Poku pointing me to Wole Soyinka's Reith Lectures at the time. And sustaining a deep conversation with me about its implications over a week.

Wereko Brobbey insisted once I was so close to Pratt, I had to be a socialist. That would lead to long debates about the relevance or otherwise of ideology to political mobilisation.

At the peak of their powers, they were magical. The AFC was a truly antisystemic movement.

Naively, I thought then that all Ghana needed was a united opposition that could usher in true multiparty democracy. And we would be in Nirvana.

I am a much more experienced and jaded person now. I do not entertain neoliberalism and its illusions.

It also became clear to me then that politicians will always have their interpersonal rivalries. I will be betraying confidences if I say any more. But present political polarities among former AFC leaders tell an eloquent story.

The organisation was not without its own internal wrangles. And the older politicians with ambitions to be President, were not altogether happy at the prominence Akufo-Addo was getting from the AFC.

The organisation was attacked on all fronts. Inevitably, to the considerable dismay of many of us the young comrades, it disappeared.

People like me, totally disillusioned with the return to parties, gave up on the whole thing. I have never joined an organisation with politicians since.

You have to be made of special material to be able to cope with their horsetrading and sometimes plain doublespeak. Do not join if you cannot cope in that environment.

Whatever became of them and our democracy, there was once a time when many Ghanaians were not smug about their circumstances. They were willing to think deeply about what kind of society we wanted to live in in the future. And some gave everything in pursuit.

Someone more qualified than me should now review how we got from there to the anomie conditions we now have. This Robinson Crusoe Society and Incompetent State.

With a smug and easily satisfied metropolitan elite that even in the face of sovereign default, remains unwilling to confront reality. Pushing strange orthodoxies like organisation of charity to replace the outcomes of good governance.

Some say we must be positive. By telling ourselves lies? What kind of joke is that?

For now, this is as far as I will go. The way we have worked this democracy has not worked. Aluta continua.

The writer, Yaw Nsarkoh has extensive experience, spanning over 29 years with Unilever, in leadership and managing market conditions at strategic levels across developing and developed economies. His areas of expertise include Business Development, Strategic Leadership, Marketing and Branding, Corporate Governance and Organisational Strategy and Leadership. He is currently an Executive Vice President of Unilever based in the UK.