250 Ghanaians expected to arrive from the UAE - Shirley Ayorkor Botchway 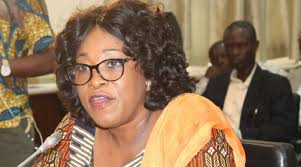 The Minister for Foreign Affairs and Regional Integration, Shirley Ayorkor Botchway said 250 Ghanaians are expected to arrive in the country from the UAE.

The Minister made this known at the Information Ministry's press briefing today, June 16.

According to her, Ghana has so far evacuated 856 stranded Ghanaians back to Ghana.

The Minister also said some Ghanaians who travelled to the United Arab Emirates (UAE) to seek greener pastures but became stranded are also being evacuated.

According to the Minister, the first batch has arrived and the other batch is currently en route to Ghana.

“The people in Dubai were part of those brought back and another group are on their way as we speak. They are people who were found loitering because of the circumstances of how they live. In such places as Dubai, many of them worked as artisans, maidservants, or domestic workers. They live in dormitories and work in hotels as well and once your employers lose their job, they kick you out and those in such countries were kicked out so they were living anyhow,” she disclosed.