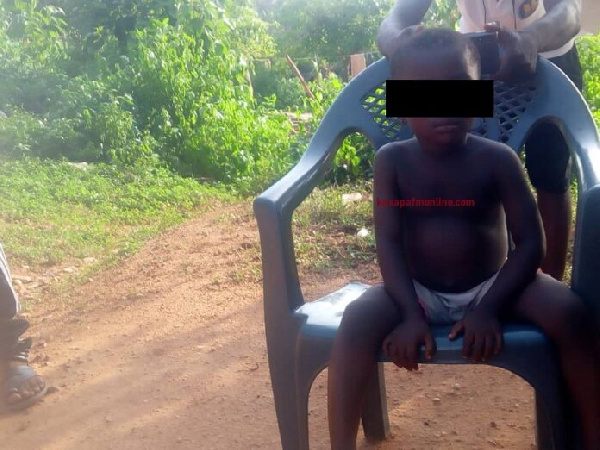 The victim told Kasapa News Yaw Boagyan that the man told her to come for money to buy food as he normally does to her but upon reaching his room, he immediately locked the door and put her on his bed and inserted his penis into her.

She said the suspect covered her mouth with his hand in order not for her to shout for people to hear.

â€œHe didnâ€™t give me the money after he defiled me and he also told me not to tell anybody else I will die and so I also kept quite.â€

The elderly sister of the girl Olivia Acquah disclosed that anytime they want to bath the girl she cries especially when they want to wash her vagina so they forced her legs opened and when they inspected her vagina they saw bruises.

â€œWhen we asked her and she narrated how it happening but said the man told her not to tell anybody else she will die.â€

The suspect has gone into hiding after committing the crime.

According to the victimâ€™s grandfather, the case has been reported to Breman Asikuma Police Station but nothing has been done about it. He, therefore, pleaded with the Police to urgently act on the matter.

He said theyâ€™ve not been able to send her to the hospital because they donâ€™t have money hence they are using hot water to treat her but is not the best.