Accra: Man sentenced to 20 years in prison for impregnating stepdaughter 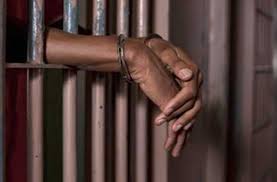 A Circuit Court in Accra presided over by Her Honour Mrs Christiana Cann has sentenced a mason to 20 years in prison with hard labour for defiling his 13-year-old stepdaughter.

Eric Kofitse, pleaded guilty for defilement and was convicted on his own plea by the Gender-based Circuit Court.

Chief Inspector Kofi Atimbire, the prosecutor in the case while presenting the brief facts to the court said the complainant is a driver, while the accused is a mason.

According to him, the complainant is a driver who lives at Dansoman whilst the accused is a mason and lives at Christian village near Achimota.

The prosecutor told the court that, the girl lives with the mother and the accused person who is the stepfather.

He said since 2019, the accused person started having sex with the victim anytime the mother left home to trade. The accused person â€œthen threatened her not to tell anyone about it else, he will stab her to death in the night when she was asleep.â€

According to the prosecutor, â€œInitially, the girl could not tell anyone for fear of being killed by the accused person.

â€œWhen this continued for some time, she managed to inform the mother on three occasions but she (mother) told the daughter she will talk to her husband to stop.

He told the court that, during the early part of March 2020, the accused again had sex with the victim who reported it again to the mother.

â€œThe mother got worried and sent the girl (victim) to her cousin in Nsawam. The victim who could not stand the persistent sexual attacks from her stepfather had to run to her biological father at Dansoman''.

â€œThe victim later fell sick while she was with her father and was taken to the hospital where medical examination on 17 April 2020 proved that she was seven weeks pregnant.â€

It was then she told the father what she went through while she was staying with her mother. A complaint was lodged at the Achimota police station and accused was arrested.

Accused admitted the offence. He was charged and put before the court.