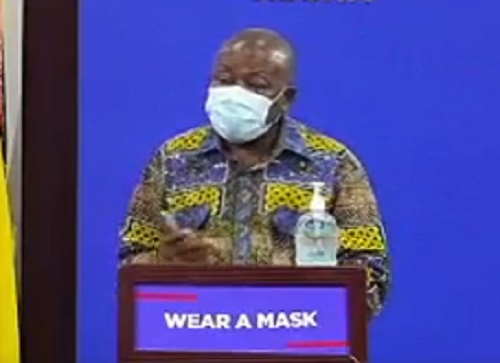 The Minister for Health, Kwaku Agyeman Manu has tested positive for COVID-19.

Report indicates that the Minister has been receiving treatment at the University of Ghana Medical Centre in Accra over the past week.

Multiple sources in the medical team at the hospital who confirmed the information to Citi News say the Dormaa Central MP was admitted to the hospital on Tuesday and is “in a stable condition”.

Checks at the Health Ministry has corroborated the story as information there suggests Mr. Agyeman Manu has taken “a few days off from work” and has not reported to work all week.

The UGMC currently has 4 patients on admission at the ICU with several others in the main wards of the hospital’s COVID-19 wing.

The Health Minister who announced Ghana’s first COVID-19 case in a night broadcast in March this year would be the first high profile government official to have confirmed positive for the novel Coronavirus.

READ ALSO : Health Minister, Kwaku Agyeman-Manu elected to serve on WHO's Executive Board

He is known for urging the public to be cautious of the virus during his regular appearances at the bi-weekly press briefings on COVID-19 by the Information Ministry which has been conspicuously put on hold for a while.

The information is coming at a time the leader of government business in Parliament, Osei Kyei Mensah has lamented how MPs, Parliamentary Service staff and journalists who tested positive for the virus have refused to self isolate.

Although no names have been mentioned, Mr. Mensah Bonsu’s lamentations suggest more than one person in the House of Legislature has tested positive and this could include MPs.

Meanwhile, the Mayor of the Sekondi-Takoradi Metropolitan Assembly in the Western Region, Anthony K.K. Sam, has passed away due to an illness close associates have disclosed as COVID-19.

A source at the UGMC in Accra where the MCE died told Citi News his Coronavirus case was compounded by a failure of the lung.