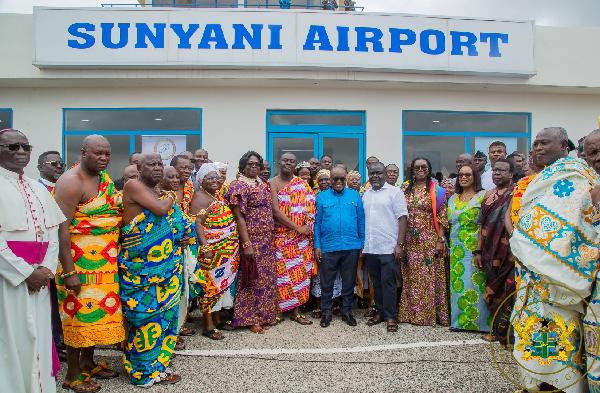 Describing the commissioning ceremony as “a seminal moment in the growth and development of this elegant city, Sunyani”, President Akufo-Addo stated that “the rehabilitation of this airport is a critical part of government’s vision to expand the frontiers of the aviation industry in the country, and to realise the dream of making Ghana an aviation hub in West Africa”.

The President further called for an end to the encroachment of airport lands across the country.

He is concerned that the practice may affect future expansion works at the various airports.

“Operators and regulators from the airport, as well as the Lands Commission, need to sit up and ensure that lands belonging to the airport are managed properly and duly protected not just for future establishments but also to protect lives and properties.”

The Sunyani Airport was originally constructed as an Airstrip and later upgraded into an airport in 1969.

The airport currently has a total runway length of 1,520 meters made up of 1,400 meters of paved and 60 meters of unpaved Runway End Safety Area (RESA) at both ends.

It had the capacity to handle and process 100 passengers per hour.

Since the commencement of commercial operations, the airport has not had any major renovation works, resulting in the poor state of the facility.

In 2015, the Ghana Airports Company Limited (GACL) and Ghana Civil Aviation Authority (GCAA) shut down the airport as a precautionary measure to forestall any disaster. Prior to shutting it down, it was serviced by now-defunct domestic airline operator, Starbow.

The rehabilitation and expansion of the airport were carried out in phases.

A contract was awarded in 2018 for the rehabilitation of the existing runway, minimal renovation of the terminal building, and construction of some airport internal roads and other auxiliary facilities.