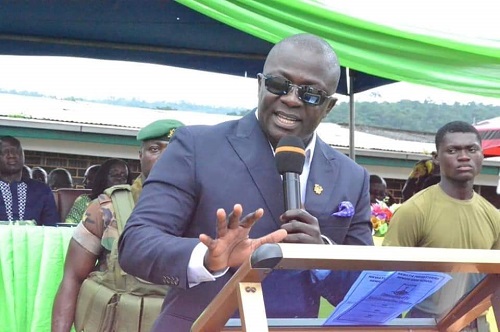 President Akufo-Addo has reassigned Bryan Acheampong who was the Minister of State at the Ministry of National Security.

Bryan Acheampong is now Minister of State at the Ministry of Interior.

A statement from the presidency, Thursday said Henry Quartey is now Deputy Minister at Ministry of National Security. The minister of state in charge of national security at the Presidency Bryan Acheampong must be sanctioned for unleashing masked security operatives to police an election, the Short Commission recommended.

The committee's report said Mr Acheampong must take “ultimate responsibility” for the operation which resulted in the shooting of six people, leaving several others injured during the Ayawaso West Wuogon by-election.

“The Commission recommends that Mr. Bryan Acheampong be reprimanded for his ultimate responsibility as Minister in authorising the operation of that character and on a day of an election in a built-up area,” the report presented to President Akufo-Addo said.

Appearing before the Commission, the Abetifi MP said the masked national security operatives were deplored from his Secretariat but denied deploying them in his personal capacity.