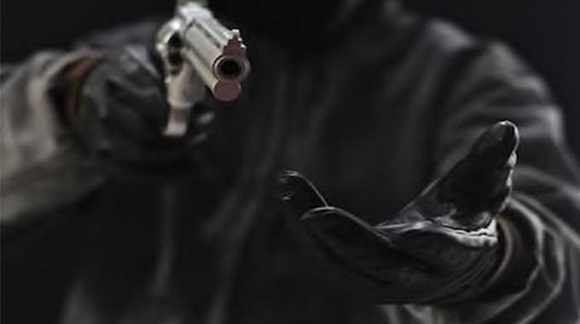 Suspected armed robbers have raided the residence of Atsu Makafui Kumordzi, a popular lotto agent at Akatsi in the Volta Region.

The gang of robbers reportedly shot to death, a father of three, Dotsey Dogbatey, a 51-year-old driver of the company.

He was shot at the left lumbar region of his chest and was later pronounced dead at the Akatsi Municipal Hospital where he was rushed to for medical treatment on Monday night.

As if that was not enough, the gang also subjected other workers of the company, Makafui and Son’s Company Limited, a licensed private Lotto Company at Ayitikope in the Akatsi South Municipality of the Volta region to severe beatings, leaving them with life-threatening injuries.

Per GNA report, the robbers forcibly entered the company and held them hostage for several minutes.

One of the victims, Gakpo Yao, a staff of the company, explained that the robbers entered the gated premises immediately after he came to submit his books and money from closing for the day’s lotto business.

He said a colleague, after hearing some knocks at the entrance, opened the gate thinking it was another batch of workers who had returned from the field.

“I was about to place my car key where we put them after returning from the field when we saw the fully armed robbers enter the house and asked us to provide the whereabouts of our boss,” he stated.

He said because they failed to provide the location of their master as requested, the robbers started shooting indiscriminately.

Cecilia Gadasu, a caterer at the residency, who suffered some brutalities, said her head, waist and knees were severely hit by some metallic and wooden objects being used by the robbers.

One other victim, Dovlo Nagodei was later referred to the Ho Teaching Hospital for medical attention due to the severity of the head injury he suffered, whilst two other victims, including a female, were currently receiving treatment at the Akatsi Municipal hospital.

The incident occurred at about 7:40pm on Monday, June 13, the time workers were returning from the field with money.

Meanwhile, the robbers managed to take away with an undisclosed amount of money before the arrival of police personnel at the scene.

The Akatsi Municipal Police Commander, Superintendent of Police, Isaac Baah, who confirmed the incident, assured the residents of steps his outfit is taking to apprehend the perpetrators.

This is the second time such incident had happened with the last incident happening on May 29, last year, where Atsu Makafui Kumordzi was physically attacked while the robbers bolted with huge sums of money.