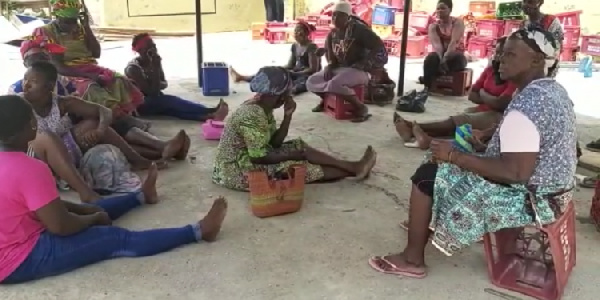 Member of Parliament for Bolgatanga Central Constituency in the Upper East Region Isaac Adongo has secured bail for all the twenty-seven market women who were arrested for demonstrating against moving to an old market to observe the social distancing protocol.

Mr Adongo believes that these women deserve better COVID-19 education and not molestation from the police.

The Bolga Municipal Police command today May 11, 2020, arrested 27 market women who clashed with the police after refusing to move to an old market due to the social distancing protocol.

Mr Adongo says the incident which led to the firing of rubber bullets and tear gas is unfortunate and should never have happened.

"I have secured bail for all the 27 women put before the court. What is the crime of these women, they have not been given any better education, have not been given the right protocols to help them understand the intentions of government and they are expressing their fears of losing their livelihoods and have not received any appropriate assurances to the effect that the arrangement put in place will secure their livelihoods. They were arrested and brought to court within two hours as if they are criminals, we have seen a Deputy AG address a party gathering without being arrested. I feel very ashamed that this is happening to my people, and you find very armed policemen molesting these women who were simply protesting for their livelihood and I believe we could have done a good job by engaging them more further," he told Joy News.

The women clad in red bands were about 60 and made their decision clear that they do not want to move from the new markets.

They clashed with the police when they wanted to move to the municipal assembly. They were stopped and later they started pelting stones at the police.

The police fired rubber bullets as warning shots and to disperse these women but arrested 27 of them.