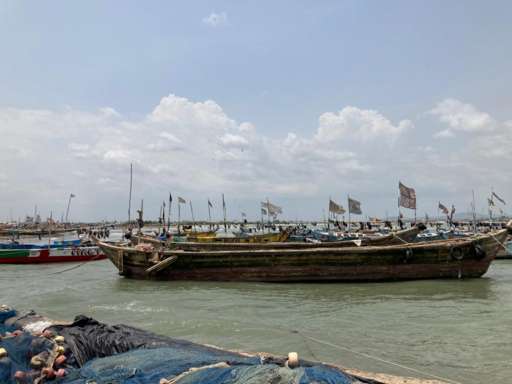 One more body has been retrieved from the Apam beach in the Central Region after some 20 unidentified children got drowned after going swimming.

Reports coming through indicates that so twelve bodies have been retrieved.

They were part of a group aged between 14 and 17 who had gone for a swimming outing on Sunday at Apam town.

The Police Marine Department is joining the efforts to retrieve at least eight more bodies of teenagers who drowned during a beach party in Apam in the Central region.

Parents and locals have gathered at the shore to wait for news of those still missing.

"I was looking for him on Sunday evening but I did not find him, I couldn’t sleep but later I heard that some children drowned and their bodies have been retrieved. So I went there and found him among them," one parent told me.

Some bodies were retrieved on Monday and others on Tuesday, a local woman told me.

Beaches in Ghana remain shut to prevent the spread of Covid-19 but the children are said to have avoided using the main routes to the beach to avoid being stopped.

The bodies of the deceased are currently at the local hospital.

An official from Ghana’s Tourism Authorities said that it was difficult to police the country's 540-km (340-mile) coastline.

Swimming in any part of Ghana’s coastline is considered dangerous because of strong undertows, but most of the country's beaches don’t have permanent lifeguards or flags warning people about the dangers.