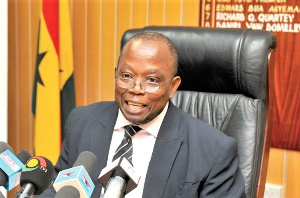 Mr Domelevo was made to proceed on compulsory leave on July 1, 2020.

The board, in a letter addressed to the President that Mr Domelevo had reached retirement age.

According to the board, Mr Domelevo had changed his date of birth on the records of the Social Security and National Insurance Trust (SSNIT) from June 1, 1960 to June 1, 1961.

The board also raised questions about Mr Domelevoâ€™s nationality, claiming he was Togolose.

In response to the allegations, Mr Domelevo in a separate letter addressed to the Chairman of the Audit Service stated that he was Ghanaian as both of his parents were Ghanaians.

â€œMy grandfather, the late Martin Domelevo Tettey, belonged to the Boye-Doe Wem (or Boye-Doe House) which is part of the Dangmebiawe Clan. He was a native of Ada in the Greater Accra Region of Ghana, who migrated to Togo and stayed in Agbatofe,â€ he said.

The Auditor-General also explained: â€œMy late father, Augustine Domelevo, migrated from Togo to the Gold Coast. He stayed in several towns and or villages before finally settling in Kwahu Adeemmra. Either my father wrongly mentioned Agbatofe in Togo as his hometown to me or I misconstrued it at the timeâ€¦.my mother is also Ghanaian.â€