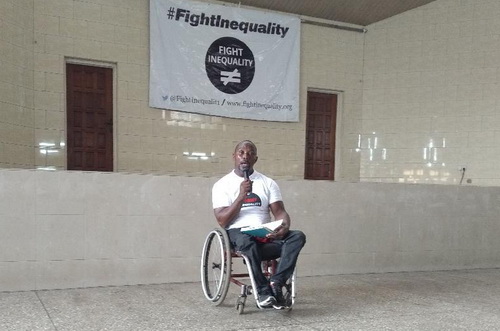 He noted that almost 90 per cent of married PWDs were marriages contracted between one disabled person and another because of societal discrimination and stigmatisation.

Mr Atipui noted that they often face hostile reception from the public any time a disabled person approached an able person to propose marriage, which is often accompanied with unprintable insults and ridiculous remarks.

Mr Atipui said this at a Town Hall Meeting organised by the Ghana Anti-Corruption Coalition (GACC) at Nima, a suburb of Accra, to galvanise public support to bridge the widening inequality gap in the country.

His comments attracted spontaneous applause and cheers from the audience, especially the disabled groups, with some giving him thumps up for voicing their heartfelt needs on a public platform.

Mr Atipui said although Ghana’s Disability Law, 2006, (Act 715) aimed at ending the discrimination faced by People with Disability gave a 10-year moratorium for old buildings to be renovated to disability-friendly status, the target has not been met.

He said PWDs continued to suffer discrimination when boarding public transport and the Ghana Private Road Transport Union (GPRTU) has done nothing to improve the seating arrangements in commercial vehicles to make them comfortable.

Mr Atipui entreated faith-based organisations to renovate their buildings to reflect the prescribed policy noting that if the nation could bridge the gap of inequality, it must start from religious organisations and homes.

Meanwhile, Mr George Abelse, a Member of the Ghana Blind Union, lamented the widespread discrimination meted out to PWDs and narrated his personal experience in public offices where he was made to wait for hours without being attended to.

He said PWDs had, over the years, faced neglect by government and other state institutions, hence the increasing number of disabled persons flooding the streets to beg for alms.

“I once went to a public office and the lady receptionist made me to wait for more than an hour and when I inquired about the one I was looking for, she said…’Oh!...Are you still sitting there?’” Mr Abelse said.

Mr Abelse underscored the need for government to implement provisions in the Disability Act to enhance their conditions of life because “disability is not an inability”.

Madam Beauty Emefa-Nartey, the Executive Secretary of the Ghana Anti-Corruption Coalition, urged civil society organisations, state institutions and all well-meaning Ghanaians to join forces to stamp out inequality in the society.

She cited instances where a ruling government had provided social amenities to communities that voted for it during the elections due to political expediency, at the expense of communities that actually needed the facilities.

“Government should share the national resources fairly among the people and not based on political affiliation, if the nation really wants to develop and bridge the inequality gap,” Madam Emefa-Nartey pointed out.