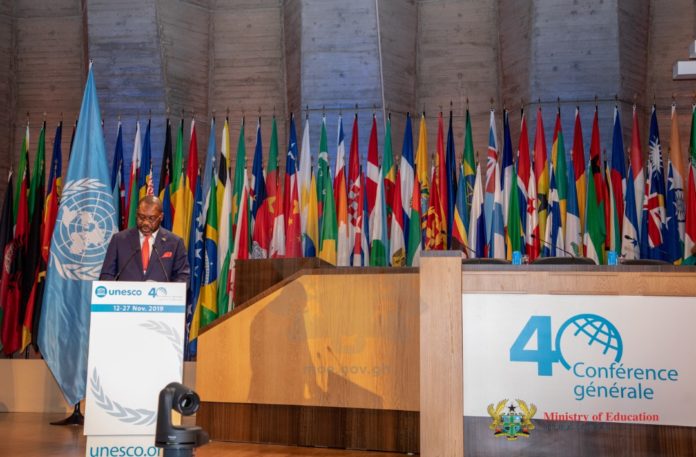 The Minister of Education, Matthew Opoku Prempeh, has announced Ghana’s bid for re-election to the Executive Board of UNESCO.

Addressing the global body as the head of Ghana’s delegation to UNESCO’s 40th General Conference in Paris, France, the Minister solicited the support of member states in its bid and spelt out some of the areas of activity Ghana has pursued in the past year.

Specifically, Dr Prempeh referred to steps Ghana is taking to consolidate the gains of the ‘Year of Return 2019’ project announced earlier by President Akufo-Addo and which enjoyed support from UNESCO.

He also reiterated Ghana’s proposal to upgrade the Institute of Education Planning and Administration (IEPA) of the University of Cape Coast to a Category II status, with the Government of Ghana contributing $3.4m annually to the operations of both the proposed IEPA Centre and the AIMS Ghana Category II Centre.

UNESCO’s Executive Board is one of its three constitutional organs and is elected by the General Conference. Acting under the authority of the General Conference, the Board examines the programme of work for the organization and corresponding budget estimates submitted to it by the Director-General.

The Board consists of 58 member states with a four-year term of office. Ghana is has come to the end of its first four-year term, having previously been appointed to the board in 2015.