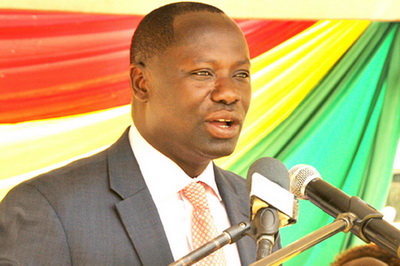 MP for Ellembelle Constituency, Emmanuel Armah Kofi Buah has threatened to place an injunction on the upcoming district level elections and referendum for the election of MMDCEs.

The MP indicated that the EC has no business conducting any form of elections in the country until it resolves challenges associated with the recent voters’ registration exercise which according to him, disenfranchised some Ghanaians.

“I try to ask the Speaker to guide me to basically summon the Chairperson of the Electoral Commission to come to Parliament to explain what has happened and give us the steps they are taking to rectify the matter and I believe that if that has not been rectified, the EC has no business conducting elections in this country.

“I have to tell you that I am proceeding to court to put an injunction on this District Assembly election and the referendum until these issues are rectified. It has to be upsetting. We should be very very upset. You guys should see how much money has gone into this exercise. And for us to know half a million of Ghanaians including 5,000 from my district have been disenfranchised," he said an interview with Citi FM

The election of MMDCEs was a major campaign promise of the New Patriotic Party in the run-up to the 2016 election.

Government has already presented the amendment of Article 243 (1) of the 1992 constitution bill which requires the President to appoint Metropolitan, Municipal and District Chief Executives (MMDCEs) to Parliament.

When passed, all MMDCEs would be elected by Universal Adult Suffrage after the 2020 general election.

Currently, Article 243 (1) of the 1992 Constitution stipulates that District Chief Executives for every district are to be appointed by the President with the prior approval of not less than two-thirds majority of members of the assembly present and voting at the meeting.

In addition, the Bill amending Article 55 (3) would also pave the way for political parties to sponsor candidates for elections of the MMDCEs and the Assembly Members.