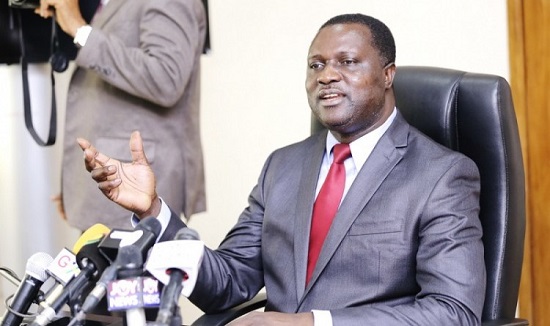 Dr Yaw Osei Adutwum, Minister of Education, says English Language proficiency is critical to the development of Science, Technology, Engineering and Mathematics (STEM) in the country.

Dr Adutwum said this when he received over 3.7 million English Teaching and Learning Materials in Accra on Tuesday for onward distribution to over 11,000 schools across the 16 regions of the country.He was also accused of inciting the youth to rise up and demonstrate against chiefs if they fail to come clear on their roles in or stance against illegal mining.

The chiefs in this regard considered the words of Odike disrespectful and slaughtered a ram in a traditional rite to prevail on the gods to help resist any rebellion against the Asante Kingdom.

The English Teaching and Learning materials valued at $5 million and printed by three local firms – Sec-Print, G-Pak, and Buck Press, is expected to enhance reading performance in public schools.

USAID for the past eight years, through its Partnership for Education, Learning Activity, spent $96 million on the entire project, which includes radio reading programmes on national television.

The aim is to improve the reading performance of pupils at the early grade level of KG2 to Primary four.

He said the printing of the learning materials for public schools would close the chapter on what he called “lack of textbooks reported in the media.”

The Minister said by the time school reopened in September there would be availability of textbooks for all.

On the introduction of the National Standardization Test for all Primary four pupils, he noted that Ahafo Region excelled in Mathematics and English Language.

He pledged the government’s commitment to ensure equity in all public schools in terms of provision of logistics and infrastructure and commended the US for supporting Ghana’s educational sector.

Nana Baffour Awuah, a Director of Pre-Tertiary Education, Ministry of Education (MOE), said with the current Transition to English (T2E) programme, the USAID had provided enough teaching and learning materials in 11 Ghanaian languages in 5,325 targeted schools.

“It is worth noting that the USAID support did not end with these target schools, the support will be extended to non-T2E Plus Schools.”

Nana Awuah assured that the materials would be put to good use and reading performance improved.

Madam Virginia E. Palmer, US Ambassador to Ghana, noted that quality teaching and learning could lead to economic viability of every country and pledged the continuous support of her country to Ghana.