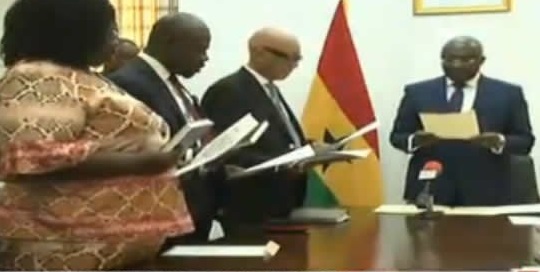 Vice President Mahamudu Bawumia has charged the three-member Commission of Inquiry to investigate the Ayawaso violence to ensure that they do a job devoid of partiality.

He asked as the Commission to do a clean job that will ensure that those who are guilty will face the law.

Vice President Bawumia made these remarks when the three-member Commission made up of former boss of the Commission on Human Rights and Administrative Justice (CHRAJ), Francis Emile Short, law professor, Mrs. Henrietta Mensa-Bonsu and former Inspector-General of Police, Patrick Kwarteng Acheampong were sworn in today.

"As you are aware, President Akufo-Addo decided that due to the public interest this Commission be set up to look into the incident that occurred at Ayawaso, so they undertake an impartial enquiry into the circumstances"

"In doing this the President had to look for people with integrity and I don't think anyone can question the integrity of the people constituting this commission" he added.

The Commission of Inquiry is expected to complete their work within a month.

Chairman of the Commission Justice Emile Short thanked the President and promised to do a transparent job.

The Commission is expected to investigate circumstances surrounding the violence at La Bawaleshie, in the Ayawaso West Wuogon constituency during the January 31 by-election.

The Minister of State in charge of National Security, Bryan Acheampong has said the men were deployed as part of an operation although he didn’t disclose such.

The men have, however, been accused of being members of the governing NPP affiliated vigilante group, Invincible forces.