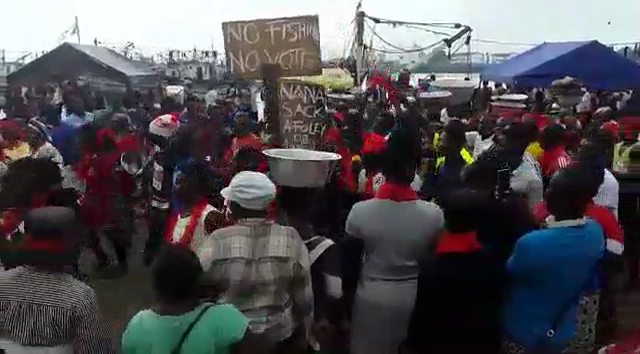 Members of the Ghana Inshore Fisheries Association at the Albert Bosomtwe Sam Fishing Harbor in Sekondi are protesting against government's decision to place a ban on fishing activities for the month of August 2018.

Government has through the ministry of fisheries and the Fisheries Commission, placed a ban on fishing activities for the month of August 2018.

The ban dubbed "Close Season' which is expected to begin on August 1 and end on August 31 will ensure that pregnant fish are able to give birth and feed properly on the chlorophos that would be supplied during the season.

Although the directive states that fishing will resume in September, most fishermen in the country have expressed displeasure at it.

Following the ban, the President of the Farmers and Fishermen Association of Ghana said that the ban will negatively affect fishermen and further worsen their economic plight.

“Fishermen are going to suffer following this decision. How do you expect them to feed their families and pay for the fees of their children?” he asked.

“I think proper measures should be introduced to streamline activities of fishermen in the country and not a ban on their activities,” he stated.

Similar concern has prompted the fisheries Association at Sekondi to protest the ban, claiming that August is when they record bumper harvest on the fishing calendar.

The members are therefore pleading with the government to reconsider the decision as it will affect them.

Some of them have explained they have contracted huge loans which they are using for the season, therefore, they will be in debt if they don't go to sea.