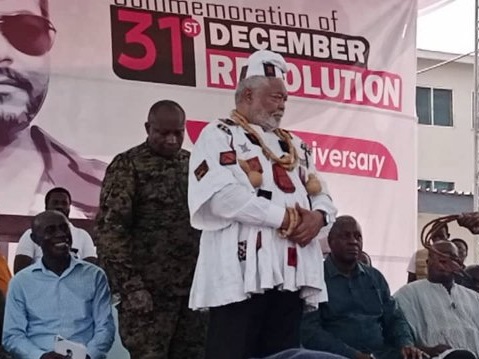 Former President Rawlings has hit back at the University of Education, Winneba (UEW), for their statement on his remarks concerning the impasse in the school.

It will be recalled that Mr. Rawlings during the 38th Commemoration of the 31st December Military Uprising held in Winneba, said: “it will be unfair to conclude without touching on the case relating to social injustice and violation of the rights” of Prof Avoke and the 19 others by the Abeka-led Council.

He went on to speak extensively about the issue and that made UEW management respond.

In a statement signed by the Registrar of the university, Paul Osei-Barima esq. he described Mr. Rawlings' comments “as unfortunate and a complete distortion of the facts arising out of misinformation and/or a loss of touch with the developments at UEW over the last two years”.

Rawlings in a lengthy post says he would not have responded to this but have to do so because of the misrepresentations of facts and outright lies that have consistently been churned out by the University, since the inception of the impasse.

Read the full statement below